An Open Letter To Mr Charles Dickens, Because He Let Me Down by Linda Cosgriff

You name the year so many times, I think you may have lost your head a little.
But wait! A Mysterious Stranger; A Smelly Coach; A Misty Night.
A page-and-a-half of a minor character’s censure of his boss – miles away,
I might add, from anyone with the capacity to give him the kicking
he so clearly deserves. Boz, it’s bleak.

We reach the hotel. Swell. Things look up: A Gorgeous Girl joins the cast
(blonde, naturally), but is immediately rendered insensible.
Reprehensible, Charles. This reader wants to like her
but she’s quickly catatonic and it’s clear her liaison with the Stranger
is strictly platonic.
I’m sorry: our mutual friend has now been formally introduced as Mr Lorry. I want no truck with him. He’s brown; he’s dull;
he has no business being in one of your novels. Habitually brilliant,
you have mislaid your talent here. You appear to have chuzzled
your wits, Chip. I’m smarting.

And so to Chapter Five: French proles guzzle wine-stroke-mud from the gutter.
No good will come of it (the aforementioned and mentioned and mentioned
Year refers). The writing is definitely on the wall; the peasants whine for blood.
It’s seedy, CD; a tale not too pretty and – so far – not at all witty.
There’s no mystery, you see, except for one: why did you write it?

Here’s a curiosity: Charles Darnay has your name and initials.
You could have shopped around a bit. If he’s anything like you,
however, I bet he gets the girl.
And so it’s hard times for Sydney Second-Best Carton;
frustration for this reader: I wanted a twist. He should have boxed clever.

Chaz, I picked up your book with great expectations
but you left me with a dreadful impression.
Perhaps I’ll watch the film instead.
It would be a far, far better thing to do.

Inkphrastica: The Leveller by John F. Keane & The Reveal, When It Came, Surprised Him by Linda Cosgriff: Inspired by Mark Sheeky’s Oil Painting

The Hunter by John Keane

He snared in words whole decades of a land,
The manners, morals, customs of a time;
His foot-worn city paved with contraband,
Its cunning commerce and its ways of crime;
Each book contained a vision caught with ease,
A tiny world-scape in a rounded glass
Replete with London fog and weathered trees,
The shadows furtive in its lights of gas.
Just weigh each hefty volume in your palm
And feel the world within; old London Town
In festive snow, with Ebenezer’s dreams;
Or bloody Paris in its time of harm;
The pits of joyless toil, unloved, unknown;
The hulks of sorrow looming down the Thames.

Inkphrastica: The Leveller by John F. Keane & The Reveal, When It Came, Surprised Him by Linda Cosgriff: Inspired by Mark Sheeky’s Oil Painting

So new to him. So old to me.
I gave you jewels, gave you praise.
I took your heart and made it ice.
I sometimes have a sick fancy.

Lay me here when I am dead.
Now I know you tired of me.
Hard and thankless on the hearth.
Wedding meats shall be my bed.

These bridal clothes shall be my shroud.
Did I never give you love,
Burning love and jealous love?
A warning and a lesson proud.

Walk me round and round this room.
Speak the truth you ingrate, you
You stock and stone. You cold, cold heart.
Remember this will be my tomb.

I held you to this wretched breast
And lavished years of tenderness.
Times forgotten. Soon forgotten.
All is broken. All is rotten.

After the story by CD

The howl in the tunnel is a trick –
winter wind or a stray dog’s whine?

Why does he still hear it?
Who wants to derail his sanity?

Two nights ago, he pushed through sleet
to shine a torch into the tunnel’s depths.

He saw nothing but the drip drip of ice,
nothing but rats chewing wires.

The clock strikes three. He wakes.
Tunnel’s mouth is a frozen scream.

He missed a call from his Controller.
His concentration switches from on to

Why does he hear the screech
of wheels? He steps into darkness again.

The tunnel’s mouth is a frozen scream.

Fog smothered streets lead one way
meandering through grime-coated alleyways
down to the pit of the darkest souls
to the soup of the Thames were smugglers roam.

Tales are told through snarls and barks
of miserly men with coal for hearts
shared ‘round smouldering fireplaces
of shoeless urchins with sooted faces.

Glimpses of light in tear-filled eyes
purest hearts sighing sad goodbyes.
Injustices held up for all to see
in courthouses, ale houses and guillotine scenes.

The religious snubbed for self-satisfaction
the lowly revered for purest intentions
CD writes truth for all to see
his words heart-engraved for eternity.

I pick the wick
to the smearing fog of an elderly Christmas Eve
to the grubby to the grubbed
to the Gabriel Grubb, sexton, lantern and spade.
He’s murdering icicles on the church lych gate
icicles: the shut-stump shadows of the spire
each one sharp as an attitude, an elbow

Grubb’s boot-print stitches the snow round Jacob Marley’s grave
tacks Little Dorrit’s Certainty of the Life to Come
Little Dorrit buried in her bonnet. Ah.
Grubb regards her soul as a Christmas Pudding
rocking in its muslin bag          wishes stirred into her
along with the silver sixpence saved from her debtor father

and Grubb, nobody and nothing are saved from his exaggeration
him morose as damp pepper, frost in sinews on his hat

Pantry Prose: Eat At The Weather! You Chin-Tie Fanfold Rainhood Squadron Member You! by Lavinia Murray

Pantry Prose: A Taxi Made Of Mouths by Lavinia Murray

To never wake again,
leave me in endless sleep
in my childhood dreams,
the ones that did not come true.
Those dreams are best.
It doesn’t get better.
Please let me rest, leave me
to my slumbering ways.

Where is the boy left behind?
No one came to save him.
The good and kind boy,
he went on one day
into the fire. He was so safe
at night, when he slept
heavy in a jungle of dreams,
never weary, sound asleep.

Where is that child now?
I do not see him.
It has been many years
since he crossed the desert.
The honest child has gone.
He would lay his lonely head
to rest and dream. He wanted
to live in those dreams forever.

Where is that child now?
He has been left alone
in the wild. Thrown to the
wolves, drowned in despair,
all he wanted to do was to lay down,
put his head on a pillow
and dream on and on.
Where has the child gone?

Flakes fall, a lead glitter
in terminal weep
among mouse skulls, asleep
in a fantasy heaven.

Deep eyes hold their coal
in her resting snow,
a taffeta landscape of dead love,
caged by spiders’ palaces
woven from a heart-wool cloud of not-to-be,
frozen among yellow’d confetti.

And as a century rolls,
time is frozen, like bronze bells’ breath in air,
capturing in glass a sense of hope from a dream past;
each unbite of cake an unkiss,
undreamed,
awaiting a pane to shock and crack,
and a spring sunshine
to melt her. 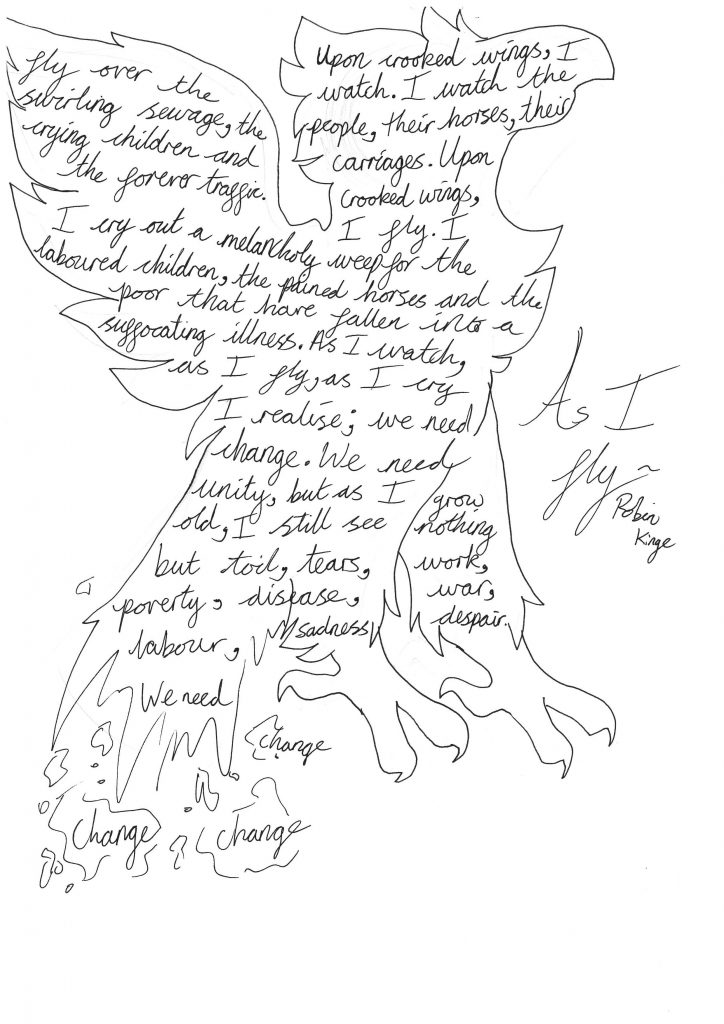