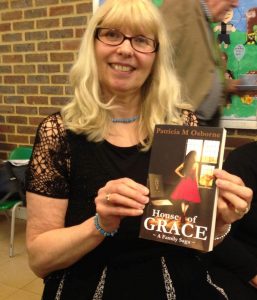 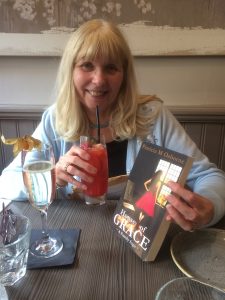 One of my favourite things about EA300 was the balance of classic and contemporary children’s literature. One notable novel on the course list which falls into both categories is Mildred Taylor’s Roll of Thunder, Hear My Cry, now in its fortieth year in print.

I’m currently helping to organise a symposium to celebrate Taylor’s novel, which will take place on Friday 23rd and Saturday 24th September at Homerton College, Cambridge. We’ll be taking Roll of Thunder as our starting point for wider discussion on children’s literature, literature in the classroom, and issues such as diversity, representation and authenticity in books for young readers.

We’re also hoping to bring together a broad group of people to join in these discussions, so whether you’re a writer, teacher, student, academic or librarian, why not come along?

You can find out more about the event here: 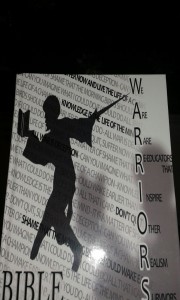 Bones is a performance poet. His new book Warrior’s Bible is now available. Keep your eyes peeled for his Inky Interview. For now, here is the introduction to his book:

Now I don’t know if you’ll agree but I KNOW it to be true! These lyrics this book ‘we’ wrote for you. Who’s we?

Me and d Higher Power, who’d be sendin me d lyrics hour after hour. Lyin in mah bed conversin wid HP in mah head, then 1 day they started sendin me lyrics instead.

It’s due seh I’m spiritual the Most High helped me become lyrical as well as inspirational, instructin and inspirin me to write this warriors bible for d people, for d likes of you aidin you to rise up and come through, cause believe me it’s way past due!!!!

Digest it cause I’m no conformist had to express my individuality through non conformity cause I CAN’T abide what you perceive as normality!! Am I revolutionary? Absolutely!! And through dat I do tings differently!!!

I hope you enjoy readin as much as I liked creatin/writin. For me it was exhileratin, enlightenin and excitin. We’re badly in need of savin, let’s hope this is d salvation. Let’s unify, be of ONE mind, we ALL humankind, you best get ready cause your minds about to be fried.

Why you waitin? Stop deliberatin bout time d pages started turnin so you can start your TRUE learnin!!!!!

Get your own copy of Warrior’s Bible:

Welcome back to Ink Pantry. We have been offline for some time while the elves took a much needed break over the summer. As you can see, we have had a bit of a makeover while we have been gone which we feel better suits the new direction that Ink Pantry will be taking in the coming months.

Let’s Start With The Good News

Ink Pantry is now in the capable hands of our new Editor-in-Chief Deborah Edgeley who has been one of our longest serving elves and whom we feel will take great care of the project moving forward. Deborah is keen to hear from anyone interested in joining her team as an Inky Elf – both new faces and returning elves are welcome. Please get in touch with Deborah by emailing her at [email protected]

Now For The Bad News

During our hiatus, we became the victim of an attack on the site and a great deal of our archives were wiped out. Due to a technical hitch while changing hosts, our backup files were corrupted. That’s why you may notice that some of the content previously published on our site is no longer available. If you did previously have some content published here that you would like to see reinstated then please email it to us at [email protected] and we will get you back on site as quickly as possible.

It saddens us to have lost so much of Ink Pantry’s history, but we are looking forwards and relishing the opportunity to make a fresh start.

Thanks for sticking with us during our hiatus!