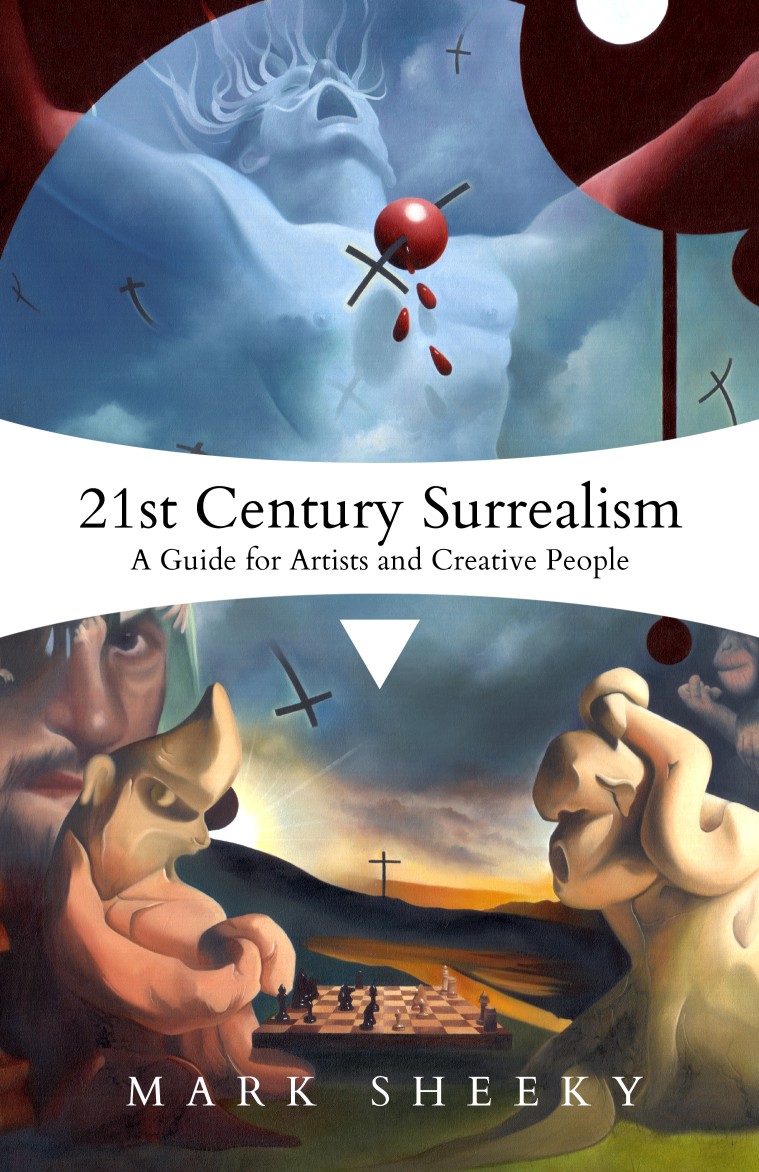 Congratulations on your new book release, 21st Century Surrealism: A Guide For Artists and Creative People. Can you give us a brief synopsis?

Thank you dear Editor, and hello and welcome to your readers. It is this tone that begins 21st Century Surrealism, because it’s a friendly book that takes the reader by the hand, and along a journey that explores art and creativity, and what art is all about. I began with a look at Surrealism as an art movement, and a look at why it worked so powerfully when it did, and why it died out as a powerful force in contemporary art. 21st Century Surrealism isn’t a history book, it’s more of a book about creativity itself, thoughts on what makes some art good, and some not, and makes the case for the art of the imagination; why it worked a century ago, and why it can work today.

I should point out that I was careful to include all art forms. Surrealism was originally a poetic movement, not a visual art movement, so the book isn’t specifically about painting or writing or music, but about general creative principles that can be applied to any sort of creative thinking.

The structure of 21st Century Surrealism has three main chapters: A Study Of Scarlet, The Tomb, and The Gardens of Elysium. Why did you choose this structure? How is the first chapter related to Sherlock?

This was my first non-fiction book, and so I had an infinity of structures of choose from. I wanted a tone that was fun and friendly, that felt, while you read it, that your mind was exploring an exciting new world. One reviewer commented that it was like an academic book written by a poet, which is a great compliment. The book argues that art should be exciting, emotive, and have a structure that is engaging, so it should itself embody its own principles. Any book about aesthetics should at least embody its own conclusions!

The Study Of Scarlet is a play on words. The first chapter is a study, an analysis, and perhaps the scarlet matter is the mind and the heart, but also I found a few quotes by Sherlock Holmes (well, Sir Arthur Conan Doyle) that sum up some important and useful principles. One quote concerns the mind needing to store only the right components. We can only invent something using the palette of our experiences, the words and images in our heads, so the things we put there (Dali called this ‘eye food’) are very important for a creator.

One important part of the book is a look at how the mind works because this is really important for imaginative people. Surrealism was based on a theory of the unconscious, so anything that analyses surrealism must analyse consciousness too. Consciousness is simply being aware of our thoughts, that is all. There might be a thing called the unconscious, a realm of thoughts that we are not aware of, but we must become aware of it at some point otherwise it might as well not exist. Ultimately, I make the case that dreams and strange imagery are no more or less ‘conscious’ or genuine than any other thought. Surrealism as a principle is a fraud. Imaginative thoughts are not more or less conscious than any other, and not better or worse for it either.

How important do you think emotion is in creating art?

This is a difficult question. In some ways emotion is vital because all good art moves us, so art needs to be emotional, but the emotions in an artwork are made by the dialogue between the artist and the audience. An unfeeling artist can still move a sensitive audience. We can feel sad at a broken cup, for example. I make the case that the good artist needs to feel and understand what he or she is trying to convey though, and not leave things to chance, so, for the perfect artist, sensitivity is vital. Emotional sensitivity is as vital to an artist as eyesight is to a painter.

Do you think art needs a political/social/philosophical message, or is it enough to just feel emotion from it?

Art with a political/social/philosophical message is often emotional… and it will help the audience understand it. Perhaps art that lacks those things must only be personal, but even then we must understand the experiences of the artist and the message. Is it possible to have art without a message that is still emotional? I imagine a Rothko painting, with flat coloured bands. People can be filled with emotions by those paintings, and perhaps they are picking up what the artist felt when he painted it (this is the aim of abstract expressionism). Isn’t that a personal message? Even in that most simple and most abstracted form of art?

Can you share with us an illustration from the book? 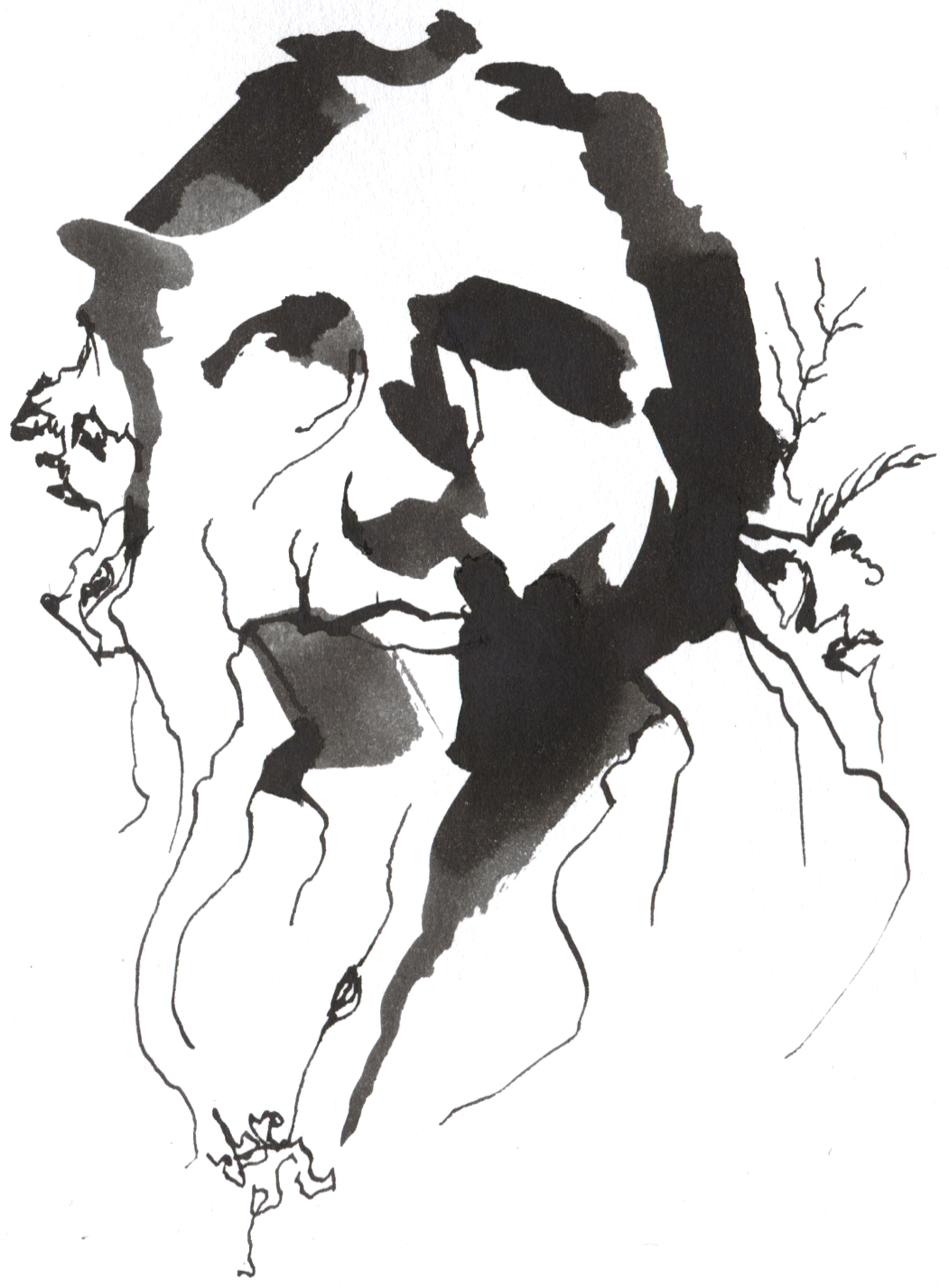 The book cover is from your own painting entitled God Being Killed By Thesists And Athiests. Can you walk us through the idea behind it, and why you chose it as a book cover?

The painting was about a battle between theism and atheism, with religion on the left, and atheism on the right. The interesting thing about the painting for me is that it has two different emotions and viewpoints, religious and areligious, at the same time, and appears as one or the other depending on your viewpoint. The crucifix on the horizon is either Christ representing rebirth, or a gravestone representing death. In visual terms the painting is also a battle between blue and red, light and dark, and many other contrasts. It is a dramatic and challenging painting that looks like what people think of as a ‘surrealist’ work, and so it made for a perfect cover. 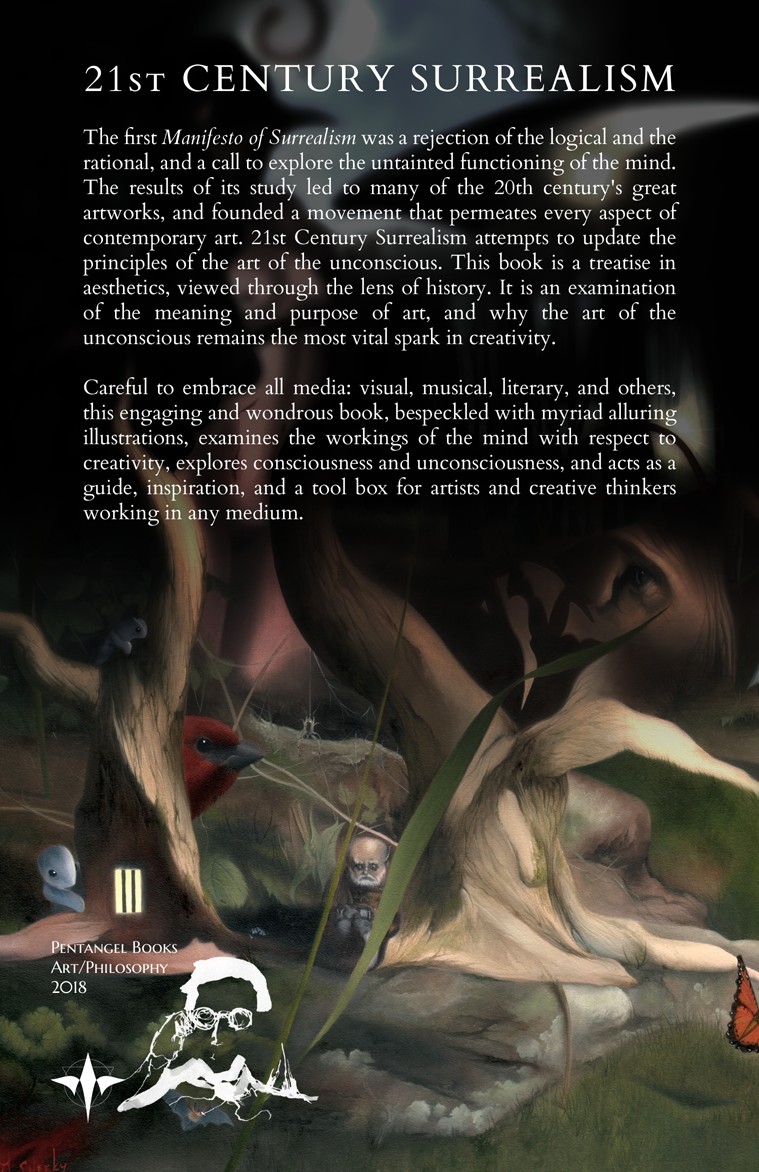 The back cover is another one of your paintings, The Paranoid Schizophrenia of Richard Dadd, which is one of your best selling prints. Why do you think people are fascinated by this image? How do you apply your concepts in 21st Century Surrealism: A Guide For Artists and Creative People to this image?

The Paranoid Schizophrenia of Richard Dadd is fascinating partly because there is a lot in it, there are always things to discover. It is based on, and is an homage to, ‘The Fairy Feller’s Master Stroke’ by Dadd, and that painting is crammed chock-full of things: faces, plants, fairy creatures. People love images that are loaded with things for them to see and discover. Another influence on the work was Bosch’s ‘Garden of Earthly Delights’. One of the principles in 21st Century Surrealism is that more information makes work better, and the Dadd painting, and Bosch too, really sums that up.

When and where is the launch for 21st Century Surrealism: A Guide For Artists and Creative People?

I’m lucky enough to have a solo exhibition of my artwork in Stockport War Memorial Art Gallery this September, so the opening of that that will mark the official launch for this book. The exhibition itself will be called 21st Century Surrealism, and I’ll exhibit 21 paintings, including the original ‘God Being Killed By Theists And Atheists’. Some fabulous poets will be taking part in the exhibition too. Former Cheshire Poet Laureate John Lindley, Nantwich poet Helen Kay, and many poets from the extensive Write Out Loud group will be writing new poems to accompany the paintings. The exhibition will open with a launch event on Saturday September 15th at 2pm. A special poetry reading event will take place at 2pm on September 22nd, which will be filmed. The whole exhibition will be open to the public daily from September 15th until October 2nd.

What is next for you? I’ve heard on the grapevine that there is another book coming soon…

So much is coming. I have a new book for the autumn called Deep Dark Light, which is an odd combination of poetry, philosophical ideas (each on one page, like poems) and a surrealistic story. It is structured like a musical symphony in text, so is an unusual, experimental work, that is perhaps similar in structure and feeling to one of William Blake’s visionary books.

I have two music albums coming out this year too: The Modern Game is a pop album with a theme of how technology is affecting the world, and as the musical half of Fall in Green, Testing the Delicates is a ground-breaking recording which combines poetry and classical piano to convey a narrative about mental health, and what it means to care. My video show for YouTube, ArtSwarm, will continue every fortnight too, and, if I have time, I will find time to paint something.

Get your copy of 21st Century Surrealism: A Guide For Artists and Creative People by Mark Sheeky 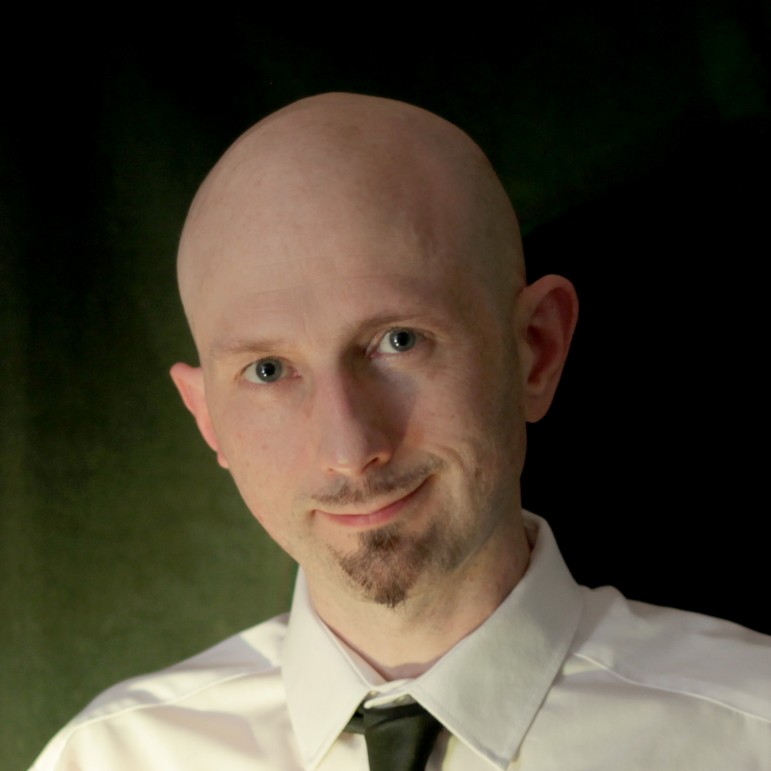