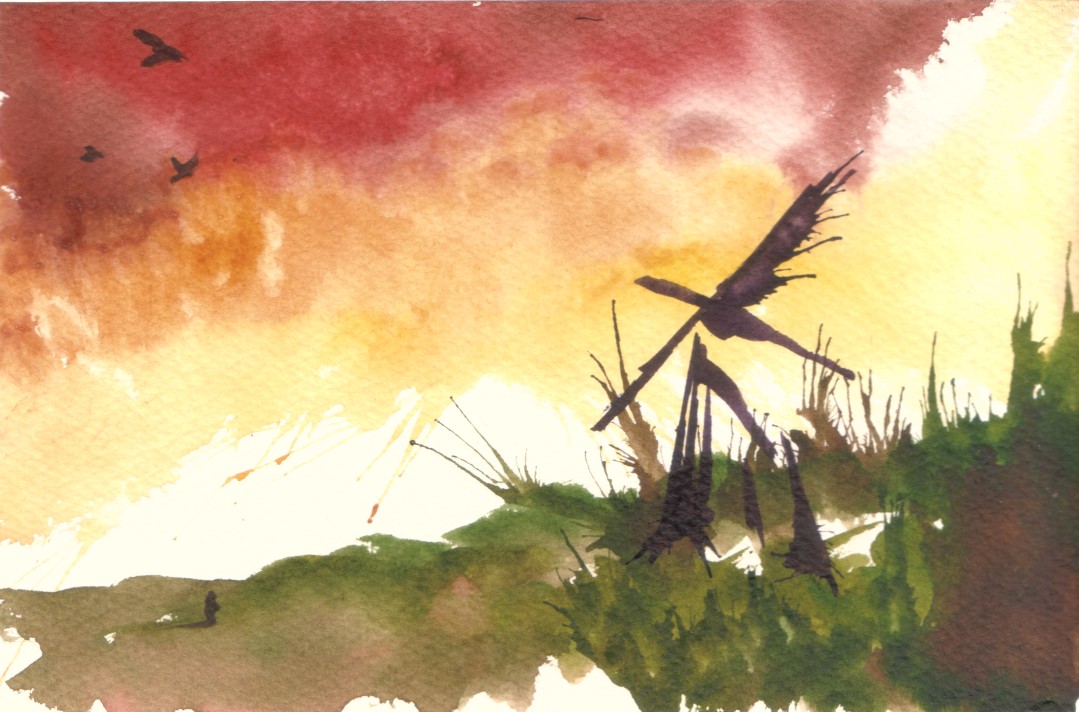 Your beautiful watercolour illustrations printed in Songs of Life showcases Songs of Innocence and Songs of Experience by William Blake. What a lovely idea. What is it about Blake that inspires you? A lot of our followers are also fans of Blake, including our past and present Inky elves.

Blake was a mystic, and a classicist, sticking to his artistic path even when his artistic beliefs were unpopular. A typical English genius, ignored and ridiculed when alive, then hailed as a hero after his death! Why does that happen so often?! Perhaps a figure like that can always be an inspiration. It’s ultra-romantic to think that any one of us could be hailed as a hero and genius after our deaths, especially those of us who struggle with poverty and a ridiculous idealism for art. Tragic heroic figures like van Gogh or Chopin exude this precious feeling, liquid inspiration. Blake was a unique artist though, creating books of deep feeling and meaning, personal, and yet warmly social. His work is touching because of the personality in it.

On a more Earthly level, I illustrated Blake’s work by chance. I was attending as a demonstrator at a trade show for three days and needed something to paint, so I grabbed Blake’s book from the shelf and painted the illustrations live.

Your unique poetry book 365 Universes contains many illustrations to accompany your verse. Can you share one of your favourites with us? 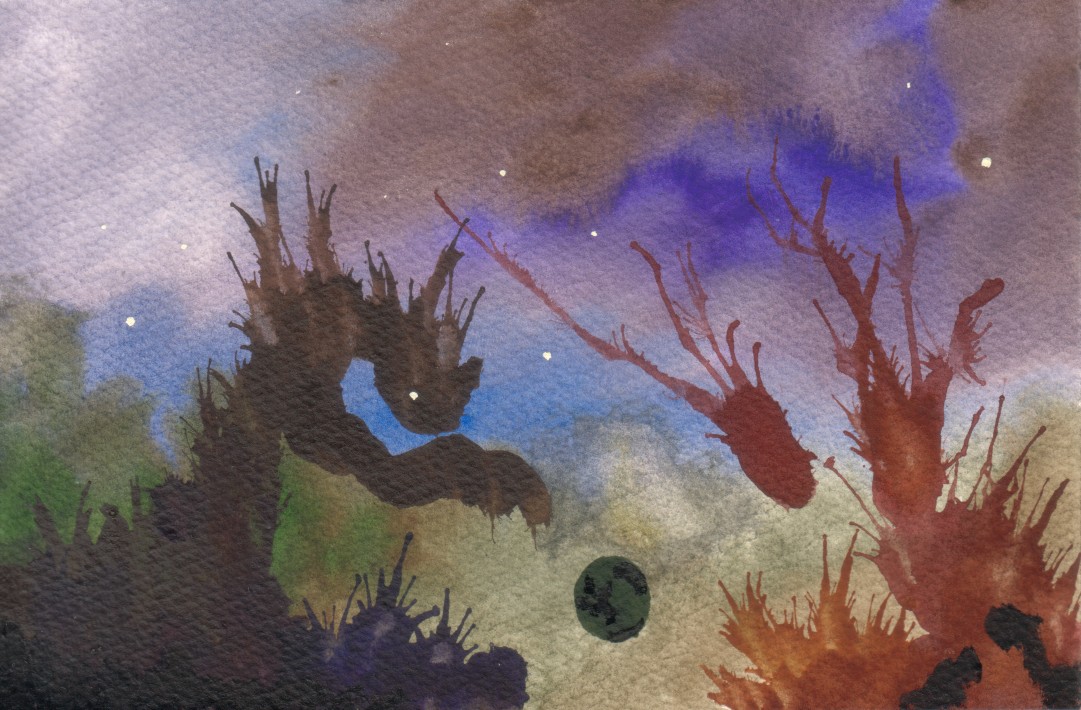 Ashes cast into the pit.
Pungent smell flows like snakes above it.
The oracle rolls her head and moans.
Sweat on her neck, eyes flit.
She awakes.

What do you care about? Which themes keep cropping up in your writing?

What do I care about, now there’s a question! At times I feel so removed from humanity and society that I wonder myself where I am and in what realm, like Blake perhaps! At times I feel utterly apart from the humans that fill this world, untouched by any, like the moon, like Mars, a castaway. Yet this is how it’s always been. Humans. All faults, evils, wrongs come from ignorance, people not seeing the consequences of their actions, yet it’s nobody’s fault. People destroy things because they don’t notice, and people destroy the environment, or cause extinctions. People breed excessively or choke the Earth. So I care about the environment, yet other animals behave in the same way, rats or bees or any creature expands to fill its space, and would do the same as humans. Monkeys would dominate if people didn’t. So I could care about education, but there are limits, even if everyone was educated, it wouldn’t stop damage to the world, or people doing things senselessly. I know that the self-preserving parts of us all will ensure that the world is also preserved; a society reflects the personality of its occupants, and all of humanity is reflected by its individuals. So, I care about the environment and all life, yet am dispassionate. I care about understanding, empathy, and beauty. It’s an old idea that beauty can improve humanity, and I believe that. Beauty is the simplest form of inspiration, and a tool we can all use to change society.

Which themes crop up in my writing? Always personal themes, I guess, whatever I’m feeling at the time. The best things I read, for me, are the moving things, the personal things that make you feel for and understand the writer. To read someone going through something you went through can be so special and touching. People love van Gogh, not for his paintings, but for his life, which he illustrated with his paintings. To express myself is my art philosophy, and therefore help others in similar situations.

Can you tell Ink Pantry about The Many Beautiful Worlds of Death?

I outlined the story a few years ago. It’s about a man who is dying, but who has invented a fantastical time and space machine, which he uses to find a cure, or really, explore his life, and the important things in life generally. It’s sort of like the literary version of the Bergman film, The Seventh Seal, but much more fantastical and bright! It’s written in a surreal and magical style, like most of my fiction.

You are also a professional oil painter of surrealist art and have exhibited widely across the UK. Tell us about one of your most memorable exhibitions.

I had one in Crewe called Heaven and Hell where I divided the venue in two, one half for Heaven, with seven cotton-wool clouds hanging from the sky, a beautiful azure silk drapery, and a soundtrack of tweeting birds, then in the Hell side, darkness and four lamps of the apocalypse, huge things made from card and wire, mostly skeletons grasping the bulb in some way, and a soundtrack of clanking bells and screams! We all dressed up as mythical gods for the opening night. Such fun! All of my exhibitions now have a show element; theme, characters, music, lighting. Art is more than painting, it’s total expression.

As an accomplished musician you have produced and published over 20 albums, from electronic to orchestral, even soundtracks. You have a sound effect library called IndieSFX. Interesting! Tell us more.

I started writing music years ago, I needed to for the computer games I used to design. So my early style was that sort of music, very computer-gamey. It was only in the last few years that I started to think of music as art and personally expressive. I recorded a concept album of ’80s style pop songs called The End and The Beginning which was about a personal awakening, a later The Love Symphony was about loneliness leading to love, in a Beethoven’s 9th Symphony sort of way! My music philosophy is Romantic in the 19th c. tradition. My last album The Anatomy of Emotions was my first of live piano music and I’m moving more towards a live sound and away from digital. It annoys me now that so much contemporary music is “too professional” sounding! Odd, that ubiquitous recording technology has somewhat killed the raw-ness, the truth from the heart that music should express, ideally!

Can you share with us a typical day in your world of art?

I do so much that each day varies, except that I get up at 8am, have regular breaks and work until 11pm every day. I’ve never had a holiday and always been self-employed. I take care of my health first, it’s our most valuable asset, but I find it easy to create, and I work by the clock. When I’m writing or painting I’ll just start at 9am, and keep going until break time at 10:30, resume and keep going until the next break. I’m highly disciplined.

Have you any plans for the future?

So many. I perform each month now in Macclesfield, art performances but often piano playing with video. I’ve got many paintings in progress, and ideas for new types of art. Painting is nearly a dead form in this century, it’s a hobby, not pushing boundaries. I have ideas for new types of art. I want to make a couple of albums too; a piano concerto and maybe a new concept album, and lots of events lined up for 2016 including an installation on Crewe station in June 10th to commemorate the Queen’s birthday, but oh, at times these all seem like pointless indulgences. None of these things bring in money and I need to start to do that. This year will be difficult, so I must also try to create things that will sell! Much as I admire heroic Blake’s poverty and post-mortem acclaim, it’s not something I wish to emulate! My destiny must be to be known while I am still alive.