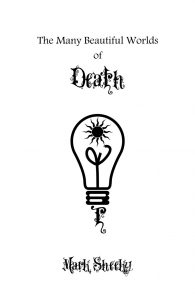 “About six weeks,” says the doctor. “It’s hard to say. We don’t like to say. Everyone is different. But not long. Not six months. Although that happens sometimes. Rarely. Six weeks is typical.”

With this opening paragraph, we are soberly introduced to the world of George and a medical diagnosis that would strike fear into any individual, brought to us by Mark Sheeky in his book, The Many Beautiful Worlds of Death.

True, George is apparently not long for this world. Yet George is not a soul to accept this news and decides to fight back against his fatal prognosis; his major weapon is in the knowledge that he can utilise his talents as a successful inventor, to create ‘Plan A’: namely, the construction of a time machine. Once successful, ‘Plan B’ will involve travelling back through history to consult with the most brilliant minds ever born in the entire universe, with the ultimate goal of defeating his terminal illness.

Following George’s journey, the reader is transported into a delightfully surreal future world. We learn that George shares his world with Pauline, a wife who spends more time and conversation with the flowers in her garden than with her husband – along with the attentions of a handsome neighbour, Roger. We’re also quickly under no misapprehensions as to George’s inventing talents, as their house is also shared by a robotic son, Adam, constructed by George.

Within this family trio, it’s impossible not to feel sorrow for George’s predicament at his most desperate time – a wife who loves him, yet seeks guidance from sunflowers, along with a robot son who lacks emotional empathy and understanding. This book is George’s personal journey, and we are swept along with it, including how his illness affects himself and those closest to him.

‘The curtains blew into the room once more, waltzing graciously for one dramatic curl before being sucked back, pulled towards the window, covering it with their cotton film, showing each angle and sharp edge of the window frame. Marking the contours of the architecture like a brass rubbing that grasps at reality but never attains it. The light outside was now dim, and rain had begun to fall heavily, casting streaking shadows on the thin yellow drapes and hissing, dripping, making a periodic yet irregular tam tam sound on the glass panes of the open window, unseen.’

The writing style of The Many Beautiful Worlds of Death is often intriguing. As a very successful and talented artist, the descriptive elements of Mark Sheeky’s book are reminiscent to me of viewing – or being inside – a massive painting; something I personally found fascinating. At times, Mark is literally ‘painting with words’ and the effect draws the reader into each scene with further depth and interest with well-constructed sensory observations.

Also, I have to say that I adored the opening chapter – essentially a short poem, along with musical notation, so that the poem could be played, or sung – once again demonstrating Mark’s musical creativity as a composer. Inserting this as an opening chapter is genius…and yes, I both sang and played it on the piano; something I would highly recommend.

In many ways this opening musical piece sets the scene for the rest of the book, as the author demonstrates creative freedom and expression on every page. What I enjoyed most about the book is that I’ve never come across a book written in the same style. It’s unique and different; something I adore within any creative genre.

Get your copy here

Ink Pantry are hosting a special book launch with Mark Sheeky and his wonderful novella The Many Beautiful Worlds of Death in Leicester on Saturday 22nd October from 1pm at Café Mbriki. We invite you to come and meet Mark, who will be signing his books on the day, and the Inky elves who work behind the scenes. Come and join our Inky Jamboree and eat cake!