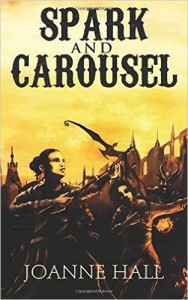 Spark and Carousel is the first book by Joanne Hall that I have bought and read. It won’t be the last.

Spark and Carousel: the title instantly threw up questions. What spark? What carousel? Was this a story about a fairground? So I picked the book up and read the blurb, which offered an explanation. Spark and Carousel are the main characters in the book. Why they have these names becomes clear. I won’t tell it here; that would be too much of a spoiler. The blurb also says: ‘Spark is a wanted man. On the run after the death of his mentor and wild with untamed magic, he arrives in Cape Carey where his latent talents make him the target of rival gangs.’

Spark and Carousel is a coming-of-age novel, so Spark isn’t a man as much as a confused teenager. Cape Carey is a large grim city, and Carousel, who is not mentioned in the extract above, is a girl – a ‘street rat’ who survives the tough life in Cape Carey by being a member of a gang.

Spark and Carousel is a fantasy novel. It contains magic and demons, but apart from that it’s realistically gritty. The city is riddled with filth and depravity, social inequality is a fact of life, and the characters act and react like real people, in spite of having abilities like controlling rock, or fire, or the weather, or demons.

The characters have flaws, too. No one in the novel is perfect. No one is pure good, and no one is pure evil. Even the demons, however creepy and carnivorous, are ‘only following orders’, and one of the dodgy individuals who gives them these orders is so strong and determined that it’s quite admirable. Admirable in a way that excludes any kind of compassion, yes, but still admirable.

My favourite character was Kayall, a mage with a passion for fashion. Although he irritated me a little in a roll-your-eyes way, I loved how, plastered with make-up and adorned with heeled shoes and dangling earrings, he charms his way through society, bedding random folk of all genders.

In spite of its grim setting and the difficult lives of the characters, Spark and Carousel is not a depressing read. It’s one of those books that has cost me precious hours of sleep, and that I sorely miss now that I’ve finished reading it.

I strongly recommend this book to any lovers of fantasy and strong, real characters. I’m buying my next Joanne Hall today.