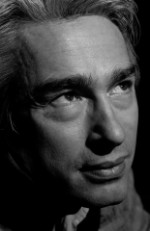 Kevan Manwaring is a writer, storyteller and performance poet.  He has also taught on all three Open University creative writing modules.  Other projects include The Cotswolds Word Centre.

To start off, please tell us a little about where you are based.

I live in Stroud, Gloucestershire, on the edge of the Cotswolds – I moved here end of 2010. It is a small town with a great community feel – and a vibrant creative scene. There are a lot of poets, storytellers, writers, musicians, free-thinkers, etc. The ‘Green’ scene is big, and it’s surrounded by gorgeous countryside, where I love to walk.

Having taught A174, A215 and A363, what do you find most rewarding about teaching with the OU?

When I see a student have a breakthrough – when something sinks in, the penny drops (in terms of the theory); or comes together (in terms of their practice). When I hear of a student’s success, eg publication or winning a competition (I’ve had students get book deals with major
publishers and win national competitions). With some students returning for A363 I’ve seen them develop over two academic years – so it’s satisfying to see this fuller arc and the development of their writing.

Many of the Ink Pantry staff and its readers are budding writers.  What would you say is the most common mistake new creative writers make?

In poetry: focusing on the meaning of the words, rather than the sounds.

In prose: poor structure, viewpoint slippage, and lack of telling detail. Most good writing comes down to sufficient visualisation. So many stories I read/assess seem ‘out of focus’ – and it’s frustrating, as you know something interesting is happening there, but you’re cut off from it. As someone who trained in art originally this has fed into my writing. I have a very visual imagination – experiencing cinematic dreams most nights! – and I write what I see in my mind’s eye. You need to make it vivid for the reader.

You were commissioned in 2010 by The History Press to work on a collection of folk tales.  Why do you think it is important to preserve folk tales?

Well, in the risk of being pedantic this project was more about reviving folk tales – rather than preserving them in an academic, set-in-amber, way (if it is possible to capture an authentic definitive telling, as each teller does it differently). The History Press commissioned professional storytellers like myself to gather together the best tale of our chosen county and, critically, retell them in our own words, with a sense of orality – i.e. for  performance; not that these are verbatim transcripts, but they capture the flavour of a live telling and the style of a particular teller/author. Many were cobbled together from fragments of local history, folklore, archaeology, field-work and imagination – so they were very distinctive creations, rather than ‘historically accurate’ versions. Being a writer rather than an anthropologist, this creative freedom engaged me more. I had the opportunity to write 80 short stories – and that’s how I approached them.

A couple of the Ink Pantry team members have been asked to perform their own poetry at special events.  We’d love some pointers on how to capture an audience when performing poetry.

From early on as a performance poet I quickly realised that if you made an effort to learn your poem off by heart then you’re going to gain the respect and attention of the audience more than just reading it. Plus you can maintain eye contact, use both hands, and not have any barrier between you and your audience. Other tips – cut the pre-amble, don’t apologise, project. Connect to the core emotion of your poem and transmit that to the audience. Enjoy yourself!

One of your recent projects led to a show called ‘Tales of Lust, Infidelity and Bad Living’.  This sounds like something we should hear more about!

This was a show based upon my life. No, seriously, it was one of a series of performances based upon The New Penguin Book of English Folk Songs, edited by Steve Roud and Julia Bishop. Bath Literature Festival wanted to create a series of storytelling performances of the ballads and that was the one that happened to still be available. I performed it in the Guildhall in Bath – there were a lot of French language students in the audience, who seemed to like it!

There are a lot of sexual politics in those traditional ballads – something I’m exploring in my new show, The Snake and the Rose (based upon my two folk tales collections) in collaboration with my partner Chantelle Smith who is a folksinger.

You are behind the Cotswold Word Centre initiative.  Please tell us about the Centre and the philosophy behind it.

It is a platform for language, literacy and literature based at Hawkwood College, near Stroud. We launched on World Book Day this year and our patron is novelist Jamila Gavin. The idea is to provide a focus for the plethora of spoken and written word-based activity in the area: poetry readings, book launches, storytelling cafes, writing workshops, literary rambles, showcases, competitions, small presses, and so on. It is early days yet – but there’s some exciting stuff in the pipeline. Folk can find out more by following the link below.

You have said your new book, Desiring Dragons Creativity, Imagination & The Writer’s Quest, is the culmination of 13 years’ teaching creative writing.  What kind of things will readers learn from the book?

They will have to read it! But it’s more about process rather than particular techniques. I didn’t want to write another ‘how to’ book, of which there are many (some better than others). It explores the creative process; and strategies for what I call ‘long distance writing’. Many writing courses focus on teaching skills that will lead (hopefully) to publication – but what happens after that? How can you keep going through the long-haul of writing a novel (or several – as someone who wrote a five-volume series, The Windsmith Elegy, over ten years)? Through the ups and downs of a writing life – the setbacks and successes? This is for the writer who wants to be a ‘marathon runner’ rather than a ‘sprinter’.

Finally, you are organising a symposium on the Dymock Poets this year.  Our readers would be interested in hearing more about this event.
The Dymock Poets, as they became known, were a group of friends who gathered in a small village in Gloucestershire just before the First World War: Lascelles Abercrombie, Wilfrid Gibson, John Drinkwater, Edward Thomas, Robert Frost, and Rupert Brooke. For a while they enjoyed long walks, cider and poetry, publishing 4 editions of New Numbers (an anthology which included the first publication of ‘The Soldier’: ‘If I should die think only this of me…’). Frost and Thomas mutually empowered each other to go on to become the great poets we see them as today. When War was declared the Dymocks’ idyll was irrevocably shattered. Frost and his family returned to America. Thomas and Brooke went off to war and did not return. I wanted to celebrate the centenary of their creative fellowship – on the eve of the First World War when they gathered in Dymock (June-July 1914). I have co-organised (along with poet Jay Ramsay) a day-long symposium in Stroud on Saturday 26th July. We have some great talks throughout the day and in the evening, a showcase of modern Gloucestershire writers responding to the themes of the Dymocks. It is this creative response to conflict that interests me more than the whole glorification of War thing. You can book through the Stroud Subscription Rooms website. I find the Dymock Poets story touching and inspiring – to the point of co-writing a feature-length screenplay about them. At the moment, it looks like a drama-documentary will be made. Anyone interested in the Dymock Poets should check out the Friends of the Dymock Poets site: http://www.dymockpoets.org.uk/index.html   Many thanks to Kevan for taking the time to speak to Ink Pantry.  Links to Kevan’s books and some of the projects he is involved in can be found below.

Cotswold Word Centre: a platform for language, literacy, and literature