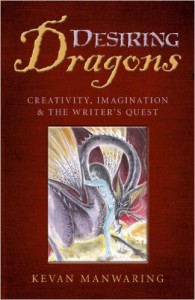 Kevan Manwaring has taught creative writing with the Open University and elsewhere for many years.  He is also a writer and performance story-teller.  He draws on these skills in this guide for aspiring Fantasy writers.

Manwaring states at the outset that Desiring Dragons is not another ‘How to Write…’ book.  Kevan believes a bedrock of knowledge is a pre-requisite to writing Fantasy.  In his experience many student writers produce weak, emulative work from lack of understanding; they ‘copy the shadows on the cave wall; without having a full gnosis of what drives their creation’.

In the first part of Desiring Dragons, using Tolkien as his guide, Manwaring defines and explores Fantasy fiction.  He is keen to distinguish between the works of respected authors such as Tolkien and poorer imitators.  He traces the genre back through time to its roots in story-telling and legend, pointing out that the Gilgamesh, believed to be the first story to be written down, is ‘epic Fantasy of the highest calibre’. Manwaring also considers the function Fantasy serves in our lives. For example, he suggests our desire for Fantasy it is to do with the German idea of sehnsucht; a profound longing for some intangible, indefinable other.

The second part of Desiring Dragons is where Manwaring deals with the processes of writing, this time using the ninth century poem Beowulf as his point of reference.  In this section the student writer embarks on Manwaring’s ‘Writer’s Quest’. They become ‘quester’, armed with a pen as their ‘weapon of magic’.  Each chapter ends with a series of writing activities, or ‘questings’.  These are designed to motivate student writers and to unlock their imaginations.

The third and final section is ‘The Dragon’s Hoard’.  This treasure trove of essays includes a consideration of our fascination with dragons, the acquisition of ‘mythic literacy’, and the ways in which creative writing is associated with well-being (imagination ‘is a spiritual vitamin’).  There is also a discussion on genre and what this means for writers, readers and publishers.  Manwaring closes with a comprehensive list of suggested further reading.

I have no great understanding of Fantasy fiction, but it is clear to me that Manwaring’s knowledge is broad and deep.  It is a book that can be dipped into, or read as a whole.  It will be re-read with enjoyment and the writing exercises will be returned to for inspiration and motivation.  While it is a scholarly book, it is also playful.  In the opening chapters Manwaring invites into his fantasy world asking us to imagine we are following a ‘gruff donnish magician into the Perilous Forest – the glow of his pipe in the gloaming our only guide’.   I believe Manwaring to be that beguiling, learned magician.

Desiring Dragons is out now and can be ordered via the following link;
http://www.compass-books.net/books/desiring-dragons