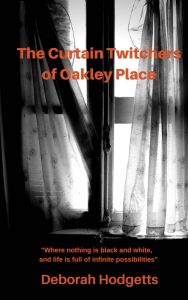 In this quaint idyllic village lurked the watchers, perched in their places of safety looking out into the bleakness of the day. Their eyes pierced the depths of my soul, clawing and drawing my safety from within. I had just moved to this leafy village in the depths of the Buckinghamshire countryside, from the chaos of the big smoke. I thought I had escaped those Curtain Twitchers; those beings of solitude entrapped and entrapping like thieves of your sanity. To the visitors who were just passing through this village, everything was blissful and most delightful; all curtains perfectly still and no sign of this eerie presence or its destructively dark drawing fear.

So begins the debut novel The Curtain Twitchers of Oakley Place by Deborah M Hodgetts, a writer more used to poetry, and published on both sides of the Atlantic. The novel follows the main character, Barney Lumsden, as he moves from the chaos of day-to-day living in London, to what he hopes is a much quieter pace of life, in a village called Oakley Place, set in the heart of Buckinghamshire. Unfortunately, Barney’s hope for a peaceful existence are dashed when he finds himself enmeshed in a web of intrigue and confusion when a travelling circus and funfair arrive in the village.

Oakley Place was a pleasant enough place but as you may expect there was quite an eclectic mix of individuals living here. It was a cross between those born and bred here and, as we were known, the interlopers. In certain places in the village I had sensed that there was a love-hate divide between the two categories of villagers. Generally, the main of the village folk were the salt of the earth and just as you would expect. However, as predictable as you may assume, you also had to contend with a minority of the high and mighty or the downright lost in the gene pool.

From personal experience, the shift from writing poetry and taking on the mighty challenges of constructing mystery novels are daunting. In her first foray into this difficult genre, Deborah shows literary promise, her descriptions and use of prose allow images to spring from the pages, especially when describing locations. It is clear to see from her particular writing style that Deborah’s foundation has been in poetry, and she uses this to her advantage.

Through the passage of time his essence had merged with the earth‚ and like the roots of a mighty oak‚ it had spread across the whole village. It travelled through deep veins within the earth – leaching out like a poison, which filtered into the very rivers, streams and air. It polluted the lifeblood of Oakley Place.

At times the story follows a hectic trail involving a wide variety of colourful characters at a fast pace, to this end the reader will need to be on their toes at all times.

Life is just full of infinite possibilities, but LOVE always holds the key.