When and why did you start writing? What inspired you to do so? Were there particular influences, literary or non-literary, that had an impact on your writing? And what was this impact?

When I was about six, I was walking to school with my aunt, and I turned to her very seriously and said, “Auntie, how many worlds do you have in your head?” She, very amused, had to break it to me that most people don’t walk around with multiple stories floating in their brains…I’ve got old diaries with scribbles in, scrapbooks of pictures, cut-out dolls that I can still remember some of the stories for, pages of plays I wrote when inspired by the latest pantomime I’d been to…I read everything I could get my hands on, graduating from fairytales to fantasy from the local market stall, and most of the fiction section in the library, and just kept writing.

I don’t really know where it all came from; I didn’t have any particularly strong influences beyond being a bookworm. I just made up stories a lot, and eventually they got complicated enough that I had to write them down – and then kept writing more!

Ink Pantry was set up by Open University Creative Writing students, so our readers are interested in the educational background of other writers. What is yours? Did you study creative writing-related courses or subjects? What else did you study? Did your studies help or hinder your development as a writer?

I have a confession: I was, and still am, awful at English Language as a subject. While I’m excellent at understanding a piece – I’m an editor as well as a writer – I can’t for the life of me tell you how someone’s doing it, or what language technique they’re using to create that effect! I can point out the problems, work out where something’s weak, suggest ways to improve it – but I have absolutely no idea how I do any of that. I did do English Literature for A-Level, but I’m afraid I wasn’t very good at that either; I did Classical Studies at university and then went into libraries and web development, and while everything contributes to inspiration and characters, I don’t think either profession is particularly known for its production of writers….

That said, I have had what I think is the best training you can have as a writer: lots of practice! I also read a LOT growing up, and on average manage about a book a week now (although of course there’s always more on my TBR pile that I was to get to). I’d honestly say that those two things are the best training a writer can have: see how other people are doing it, and try it yourself.

Can you tell us about how you got published?

Green Sky & Sparks is my first published work, and I knew (five years ago) that I was on to something of a losing streak with traditional publishing, as at that time they didn’t take novellas. It actually made my life a lot simpler; I could narrow it down to publishers that did take novellas! I had a poke on the internet, found Grimbold, liked the look of them, submitted, chewed my fingernails for a few months and got accepted! Since then I’ve been submitting short stories to a variety of places (and some have even been accepted, yay!) and I’m currently starting my more traditional publishing journey by collecting rejections. I’m only on 16, though, so I’ve got some way to go.

Your blog Writing & Coe has a page devoted to gaming, so I assume gaming is a hobby of yours? Is this board games, card games, computer games or all of those? How does gaming influence your writing, or vice versa (if at all). Have you ever taken part in developing a game? If yes, what was your part and how was it doing that? If not, is that something you’d like to do in the future?

I do several various types of gaming! I play board games with friends; my favourite is Forbidden Desert, which is a co-op game and mostly ends in death by sand, by thirst, by storm – despite that, it’s great fun. I do also like puzzle and exploratory computer games – my favourite is Portal (mostly because of the sarcastic AI) and I play a lot of Civilisation. However, my big passion is for role-play games, and I’ve been lucky enough to be able to run several games in the Dresden Files universe. I’m not currently playing any RPGs but I’d highly recommend it as a hobby; as a writer, I absolutely adore them! If you play, you get to explore someone else’s world, act and react, create your own backstory, interact with your fellow-players…and if you’re a games master, you get to build a world and then see your players take it in a completely unexpected direction! I love building something, putting in mythology and hints and ideas, and then seeing where my players go with it – it’s like writing, except you have no control over the characters! (That’s a good thing in games…usually).

I very much enjoyed reading the first four novellas in your Green Sky series, and I’m very happy that the fifth is waiting for me on my e-reader! Is the fifth one the last, or can we expect more stories from the green-skied world? Why is that sky green, anyway?

I’m so glad you are enjoying them! The sky is green because I was a teenage writer who just had to make my world special, and that was the thing I came up with – and it stayed because, well, why not? It has now led to some interesting disputes about what colour that makes the sea (the consensus is blue/grey due to the properties of water, by the way). There are ten novellas in total, each following a different character and story – some reoccur, as in Empty Skies, which follows a character you meet in the very first book, and some are completely new characters or places, which means you get to see more of the wider Green Sky world.

How do you feel about the characters in your series? Do you have favourites, who are they and why are they your favourite? Are there others that you really dislike and if so, for what reason?

Toru is my absolute favourite, if only because he is a pain in the butt! Originally, Green Sky & Sparks was a lovely cliche’d story about a boy on a quest, and a magical girl who fell in love with a different boy. I mostly scrapped that one and focused on the quest, and Catter turned up. And then he got to Meton, and met Toru, and…well, they fell in love. I pretty much stared at the page and said, “You were meant to fall for the girl! What are you doing?!” But it made the story a hundred times better, and Toru continues to have a way of stealing the page whenever he’s involved, so he has remained my favourite throughout the series.

Everyone in Green Sky is very nice so I don’t really have anyone I dislike; I’ve written a couple of nastier personalities (mostly selfish) which has been harder, but even they are understandable. However I do have characters in other stories that I do dislike – but then so does my main character, which makes for some wonderfully spectacular arguments!

You call this genre ‘sparkpunk’. Did you invent this name yourself? How did you get the idea to mix fantasy with technology in your writing? Did you intend the Green Sky series to be a series, or was did it start as a single story and expand from there?

Sparkpunk was a label coined by my friend @vcorva; we decided that it wasn’t really Steampunk – it lacks the Victoriana, and, well, the steam – but that it was Renaissance + electricity….and so sparkpunk was born! The technology was actually part of the genesis of the story – why couldn’t you have a world with technology and magic? What if magic was just another trade, with limitations…and so technology was actually the game-changer? What if someone built a flying machine? And so Toru appeared, and Catter’s story began to unfold.

Green Sky & Spark was a single story, and then I wondered what the next one would be, which led to the sequel Grey Stone & Steel (which was too long, and got split into two, resulting in High Flight & Flames as the third book). From there, I had wanted to know what happened next (book 4) and had a bit of story that I’d written but never used – and that was expanded into book 5. Book 6 came from a random character tangent; Book 7 from a dream of maps. 8 and 9 were based on specific characters, and 10 winds the whole thing up! So it was never intended to be a series, but just unfolded into one.

On reading the books I found the fourth one to be very different from the previous three. It was much more dreamy and still. Is this intentional, and if so, what was the reason for writing so differently?

It wasn’t intentional, although I think it is a result of the type of story – books 2 and 3 are a war story, even though they are very character-focused. The remaining books in the series all have different characters and feels as well; each is centered around a different type of story, a different person. I find the differences interesting as I don’t necessarily see them when I write – only when I finish and am able to step away!

What else have you written, are you writing, or do you intend to write? Which of these are/will be readily available for reading? And which would you most recommend to readers who enjoyed your Green Sky books?

My current WIP is a 1920’s urban fantasy with zombies, which promises to be spectacular, and I’m currently submitting my latest finished piece (with the working title of No Man’s Land) to agents so we’ll see what happens there. There are a couple of Green Sky short stories published in various anthologies, some freebies on Writing and Coe, and more books in the Green Sky series coming out shortly! Keep an eye on the blog for dates and news.

Beyond that, if you like Green Sky then I’d highly recommend A Long Way To A Small Angry Planet by Becky Chambers (she’s the only other character writer I’ve come across so far!) or anything by Emma Newman, who is just fabulous.

I’m over at Writing and Coe and Twitter if anyone has any questions about writing, editing, gaming, or anything else in general, and thank you for having me on Ink Pantry! 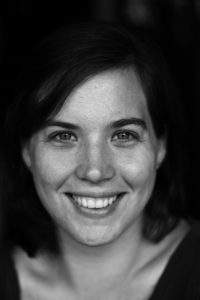