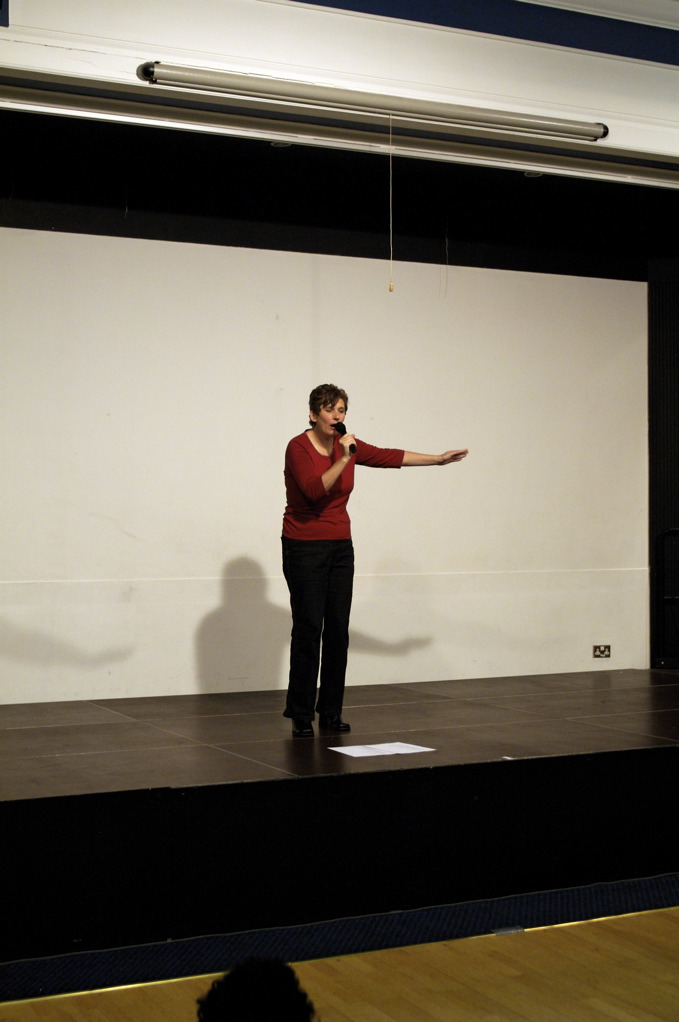 It all started through my work in healthcare. I was supporting an Asian family in Birmingham caring for one of their daughters with a life limiting condition. The role also involved supporting the other 3 siblings, who would often sit beside me on the sofa after school. One such late afternoon, I started to tell them a fun rhyming poem that popped into my head. They loved it! Driving home ‘Jonathon Dandy’ appeared – ‘looking for Gold – Gold – Gold’! followed by poem number three, inspired by taking all the children to the playground. The mother kept repeating ‘Jan you must write them down’. I did, the journey had begun. A re-location to Swindon, and employment as a medical support worker at Swindon College, was where my poetry really started to take shape, surrounded as I was, with so much creativity in Art and Design. From children’s poetry I moved into other areas, but being true to the way I saw my poetry. Poetry that reached out beyond the page, bringing people in to its words and meaning. Then a move to the south coast took me to more dimensions and performing poetry, and dipping my toes into organising Poetry Readings etc. It was at this time I developed a strong leaning towards poetry of war, conflict and its consequences. There are many special people who have been alongside me; listening, guiding, laughing, crying. I owe them everything. 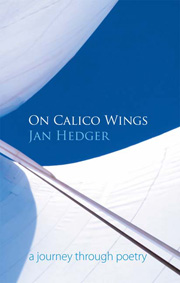 You have two published collections, Words in Imagination and On Calico Wings. What subjects do they touch upon?

Words in Imagination was my first collection and contained my children’s and lighter poetry, and I self-published it for that mother that encouraged me to ‘write them down’ and for one of my Swindon College art students, Amanda Rapley-Redfern, who became a wonderful friend and inspiration. Amanda passed away aged 21, but she remains in my writing and into the emotions of On Calico Wings, my second self-published collection, which is a journey through emotions; love, life and loss. Dreams. Emotions in conflict. A mix of emotions and inspiration. I originally intended to split the emotions into separate publications, but as in life, they belonged together.

Words in Imagination had to have a re-print! Most copies were bought by elderly patients from a rehabilitation hospital I was working in! I often performed the poems on the wards, to much amusement.

Would you share with us one of your poems and talk us through the inspiration behind it?

My fingers are torn and bleeding
My skin has shrunk to my bones
I have no strength, such is my hunger
Starvation is cruel and unyielding
And the cold, always the cold
There is no heat here in Ho8
‘The tunnels below the earth’.
I swing my pick axe, and a
Small piece of rock falls at my feet
It is not enough; they are angry
The blows from their sticks
Fall upon my shoulders
I tell myself I am immune!
But I am not, and it hurts
I feel unbearable pain
Would my mama recognise me now?
The once proud son she bore?
I think not; I cry out for her
Mama, mama! And they beat me once more.
Close by an explosion echoes
Showering us in red sandstone dust
Now we are not so different
Brothers; eyes locked in fear
For they have a mama too.
The heavy sound of footsteps
Cuts into the moment; they are panicking
I am hauled to my feet
And forced to join the slow moving ranks
Of the lost souls of men
Slaves of the German Third Reich
Leaving their dead behind.
The passage is long and the way unstable
An old man slips and falls
Amongst the polished boots
Desperately his fingers clasp my ankle
He calls to me ‘Comrade, I beg of you’
I ignore him and shake him free
In my single-mindedness to reach the light.
Oh! Such bitter sweet relief
To taste the sweet, sweet air
I close my eyes and am lost in its freedom
My mind elsewhere; I see papa!
Working the land of my birth
But no; it is the old man that is there!
Oh my papa! My papa! Forgive me!
I couldn’t help him! Dear God, I couldn’t help him!
And as the evening sky descends upon me
I fall to my knees in repentance
My darkness is absolute.

I chose this poem because it is very special to me. I had been writing only a few years when I wrote it. It was inspired by a visit to the Jersey War Tunnels, where despite the tunnels and rooms being lit and swept clean; with just exhibits on show, I ‘felt’ the past, the pain, the desperation. I ‘heard’ this prisoner. ‘Absolution’ was written and included in Forces Poetry first published anthology. The anthology was launched in Brighton with Patron Vera Lynn as special guest, and I will remember forever, my reading ‘Absolution’ with Vera Lynn watching and listening in such empathy. From being a member, I am now Administrator for Forces Literature Organisation Worldwide (FLOW) of which Forces Poetry is a part of, and working alongside Mac McDonald on a re-structuring. 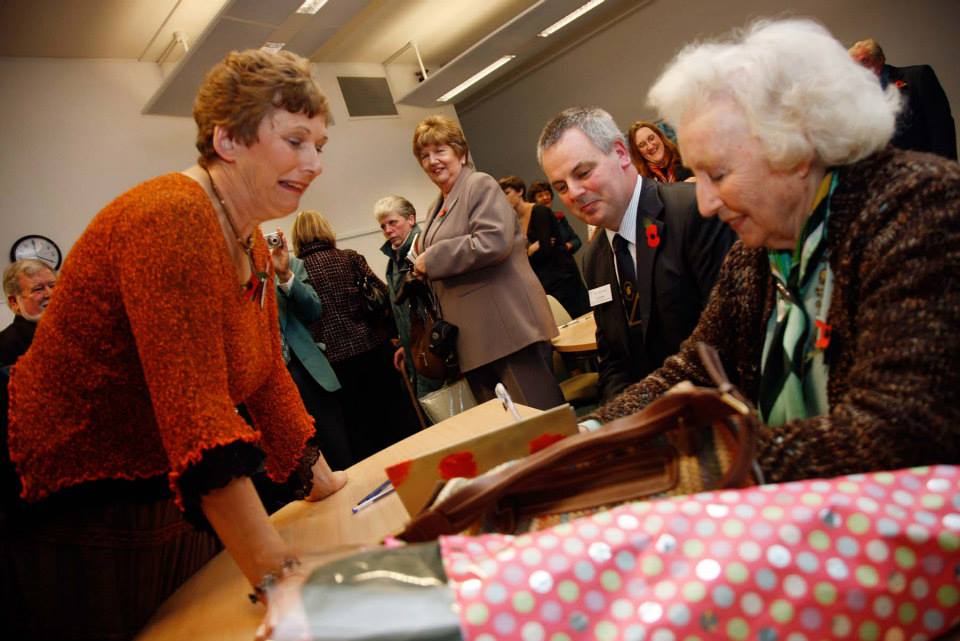 You are also an interactive poet, working with puppets. Tell us more.

As I mentioned previously I often performed my poems on the wards of hospitals I worked in. This led me to think it would be a possibility to go a step further and go independently into care homes, day centres etc. I did this for a few years as Poetry and Reminiscence, growing into the role and sometimes my husband joined me and we were ’The Poet and the Piano Player. I took the decision early on, not just to do my own poetry, but poetry of others, and began to search charity and second-hand shops for suitable material, gathering poems people would know and recognise; including speak-sing music hall pieces. While many will fully join in and share the whole session; often just one poem, or a few words will evoke a reaction in someone that is normally uncommunicative, a small response; a lift of the hand or raising of the head or sometimes saying words with me as best they can; is all the reward I need, and very moving. I also moved into other areas; with children’s groups such as Beavers and having activity tables at fairs etc., for Wildlife Groups.

One of my early poems ‘Thomas and the Rabbits’ is a conversation between a boy and a big fat rabbit, so I thought it would be wonderful to have a hand puppet rabbit to perform the poem with me. So Jack arrived and was such a success he was followed by Bert Dog and Dinky Kitten; all three having their own special poems, and helping me to deliver others. They often finish their performance with join in songs and then sit on someone’s lap as they don’t like going back in the bag! But they are very well behaved really and are very loved, as many folk have had their own pets. Through my job in healthcare, I was always passionate about the ‘social side’ of care, often overlooked with the pressures of time constraints and routine, yet contributing greatly to a person’s well-being, in their health and mental state. I take time to chat about reminiscence, letting them tell me their memories. For children, sharing the joy poetry can bring and is not a ‘scary word’ is very satisfying, and the puppets break down barriers. In between I do Ladies groups etc., and whatever the ages of my audience, they are all encouraged to join in, reciting, singing, and in the case of Dinky’s poem – ‘When I Grow Up’, act as Big Cats and a little Kitten.

The Wilfred Owen Festival in Oswestry, Shropshire is on until November 17th 2018. How did you become involved in this?

From seeing an article eighteen months ago, in the Oswestry Advertiser about the newly commissioned Wilfred Owen statue and a planned Festival around it. I thought I would like to be involved in that and sent an email expressing interest and my experience as having organised Poetry Readings at book launches, and at The Firing Museum, Cardiff Castle, and my being involved for a number of years with Flow for All. A phone conversation with Head Co-ordinator, Chris Woods followed, with the question ‘would you like to be in at grass roots level? Having said ‘Yes!’ I found myself at the first committee meeting and knew this festival was going to be special. In the course of these months I have organised four events to run in the main festival week 3rd – 10th Nov; including a Poet’s Day, a Women of WW1 day, drop-in workshops; as well as being the main school liaison. Primary schools were invited to choose a handwriting winner to copy Wilfred Owen’s words and senior schools and Derwen College were asked to select a student with a winning poem, to write on a wax tablet, which then underwent a process of being fixed onto the new Wilfred Owen Statue, which now stands in Cae Glas Park. To see the youngsters writings actually on the statue was an amazing reward in itself for the hours of ‘office work’. Schools have also done art work and are taking part in a Poetry Slam!

Have you any projects in the pipeline? What’s next for you?

First step down for a couple of months, long walks with my dog, and clean the house! Just enjoy some open time with poetry friends. Clear the mind for writing poems again, and future planning. Being so busy with The Festival, I haven’t been able to do many Puppets, Poetry and Reminiscence sessions, so I would like to build that back up. It is so much fun and I so enjoy doing it, I have put a cuddly Otter puppet on my Christmas list, to add to the family in preparation! I run my own community writing group in Oswestry, Words’n’Pics Open Writers, and we have recently co-operated with Chirk Writer’s Circle in two joint projects and we are looking to continue to work together to promote community writing. As mentioned in answer to question three, FLOW is undergoing major changes and this will mean devoting some time to a successful re-launch in reaching out to veterans, those with PTSD and their families, and those in the community with wider mental health issues. I have been asked to run some more poetry discussion groups at The Qube in Oswestry, breaking away from Women in War to Women in all aspects of life and other cultures, be nice if this comes off.

I have my debut radio slot on Radio Shropshire 08.05 with the early birds this Sunday to talk about ‘A Poets Day’ I have organised and am running within The Wilfred Owen Festival.

No other major projects in the pipeline – so time to take stock, listen, learn and observe the poetry and writing world out there.