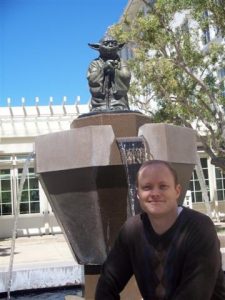 Kev Milsom: Hello Jeff. Massive thanks for offering to share your thoughts and advice with our readers. Can I start by taking you back to your younger days and asking about the earliest creative influences and literary inspirations within your life?

I wasn’t all that keen on reading as a youngster. Like many of my generation, I was bedazzled by Star Wars when it first came out and my first love was science fiction (Battlestar Galactica, Buck Rogers, Star Trek, etc). The first series that sucked me in was Lloyd Alexander’s Chronicles of Prydain. But it was reading Terry Brooks’ Shannara trilogy that lit the spark of my imagination and began to fire up the creative juices.

From a reader’s personal perspective – from your earliest publication, The Wishing Lantern in 1999 with the adventures of Hickem Tod, right up to the latest Kingfountain trilogy – your fertile imagination stands out at every opportunity. How important is this to you when composing a story? Is your main writing goal to inspire/open up the imagination of the reader, or is this simply a case of you expressing your thoughts in written form?

My creative imagination is a machine that doesn’t have an ‘off’ switch, actually. I’m constantly inspired by books I read, movies I see, or interactions between people I’ve met. Sometimes I see something and think how it could have gone another way. So while it’s not my intent to light the spark in others, it’s a by-product of an author to inspire and be inspired by other authors. It is immensely gratifying to me when a reader tells me that they are so sucked into one of my stories that they believe the setting and the characters are real people. They are real to me too, only they live inside my head.

Could you share some thoughts on the earliest inspiration/inspirations for your utterly fascinating Muirwood series of books, first published in 2013?

Actually, the original Muirwood trilogy was first self-published in 2011. The first year, it limped along and although the reviews were positive, it didn’t start selling until the Kindle Direct Program (KDP) came along. I was one of the first who jumped on board that wagon at the beginning. Since all three books in the trilogy were available at once, it also benefitted from the ‘binge reading’ phenomenon. The timing was perfect. A few months later, I had a book deal with my publisher, 47North, who re-released the series in 2013.

The earliest inspiration for Muirwood came from another writer, Sharon Kay Penman. I love her histories of Medieval England and, after reading one of her books, I learned about a real-life Welsh princess who was banished to an abbey for the rest of her life. Her story haunted me, and I decided to write the story about that period of history. Being a Medieval history major in college, I had the knowledge of the rituals of the past and tried to reinvent them into a fantasy setting so that I wouldn’t be constrained by actual events. I feel that many fantasy novels are so dark and full of inhumanity that I wanted my books to be not only safe for my own kids to read but a ray of light in the genre, a throwback to the fantasy epics of the past like the Belgariad, Shannara, and Lord of the Rings series.

Within this book series, you refer regularly to ‘The Medium’, alongside other elements incorporating esoteric, spiritual ideas. Are spirituality & philosophy aspects which inspire you in your everyday life and, if so, how much of the characters’ ideas reflect your own beliefs?

I currently teach religion classes to high school students before school each day (it’s called early-morning seminary). So yes, I have a rich spiritual and philosophical background. I love collecting quotes from ancient philosophers, anything that strikes me as being particularly wise. So the characters’ ideas are more a reflection of the wisdom of the ages than my particular beliefs. I’m not shy talking about my religion on my website, but I infuse a variety of spiritual traditions into my works and not just my specific faith. I write what I like to read.

Regarding your writing set-up, is there a favourite place, or location, where you like to begin writing? Also, are you someone who employs a notebook and pen, are you devoted only to writing on a computer, or are there elements of both?

I’m definitely a creature of habit. I have a den downstairs with a white noise machine. I usually write in the mornings when my five kids are in school and the house is quiet. I really need the quiet in order to get into the zone. I absolutely cannot stand my own handwriting and find it difficult deciphering it, so I’m definitely 100% composing on my laptop. I type over eighty words per minute, so it’s just more efficient to do it this way. The one variation to this is I do keep a notebook for character and place names that I come up with or discover over time. I do peruse this list when I’m looking to create something new, or I’ll go to Google Maps and seek inspiration looking at cities or street names.

To follow on from this, could you share how long it takes you to put a novel together? Also, is this a slow, deliberate process, with detailed planning/sketches/notes/research, or are you a writer who works best when working spontaneously and ‘in the moment’?

Basically, I write a novel-length manuscript in three months. I’ll then spend another month revising it and seeking feedback from my early readers. I usually do a rough outline of the plot but seek inspiration on the specific chapter-by-chapter meanderings to get there. I don’t have extensive notes. I’m always researching because I love to read. So it’s definitely a mix of in the moment and careful planning.

What advice would you give to prospective writers, Jeff? If you had access to a time machine, is there something which you would travel back to your sixteen-year old self and say ‘Do THIS, but please, whatever you do, don’t do THAT?’

If I had access to a time machine, I would have told myself to invest in Amazon stock from the get-go! Other than that, the advice that would have helped me the most is the advice I heard from Terry Brooks during a writing seminary. After you’ve written your first million words, you’re ready to start being a writer. That might have discouraged me because I wrote five novels during high school and none of them are any good. But it was the practice that helped me hone the craft, and I’ve found that there isn’t a substitute for it. Practice, practice, practice!

Ha! I totally agree regarding the Amazon stock. Huge thanks for taking the time to share your wealth of experience with our readers, Jeff. It’s always a fascinating process to learn from established writers and take on board advice that offers help within our own writing. To finish, what does 2017 hold in store for you and your readers? What’s next on the ‘To Do’ list?

I have four books coming out this year. The Maid’s War (a prequel to the Kingfountain series) came out this month and the next three books of the Kingfountain series starts in June. I’m almost done wrapping up the final book and haven’t decided which book on my ‘To Do’ list is going to happen next. I have some ideas but not ready to spill the beans yet!

Thanks for having me! 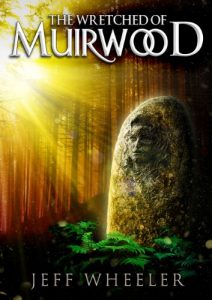 The Wretched of Muirwood by Jeff Wheeler: reviewed by Shirley Milsom:

‘She looked into the Leering’s eyes, into the curiously bland expression carved into a woman’s face in the stone. She never used them unless she was totally alone, or with Sowe. Only learners or mastons could use the Medium to invoke their power. Staring at the eyes, she reached out to it with her mind.’

I am a huge fan of fantasy novels and had been unable to find anything recently that grabbed my attention, or piqued my interest enough to purchase it. An online search led me to ‘Idumea’, the official website of Jeff Wheeler, an American author who has sold more than one million books. ‘Idumea’ is a blog-like area where readers can learn about his journey as an author, and snippets about his novels.  I was pleased to see he was a Star Trek fan, as am I. It also appeared that he was a fan of another favourite writer of mine, Terry Brooks – author of the Shannara series. Jeff’s website led me to The Wretched of Muirwood, the first book in the Muirwood Trilogy, which was released in 2013.

In the ancient and mystical land of Muirwood, set in an era very similar to the Medieval period, Lia has known only a life of servitude. Labelled a ‘wretched,’ an outcast unwanted and unworthy of respect, Lia is forbidden to realise her dream to read or write. All but doomed, her days are spent toiling away as a kitchen slave under the charge of the Aldermaston, the Abbey’s watchful overseer. When an injured squire named Colvin is abandoned at the kitchen’s doorstep, an opportunity arises, and an adventure ensues, as Lia discovers that she has powers linked to a mystical or all-encompassing power.

Jeff has the ability to paint such evocative pictures as you travel through Lia’s adventures in the opening book of the trilogy, and leaves the reader wanting more, making an easy leap towards the second book in the series, The Blight of Muirwood, and the third instalment, The Scourge of Muirwood. He has a great command of his craft; he is descriptive without being too flowery, and the dialogue and build-up of the characters is masterful.

On his official website, Jeff says ‘It was Terry Brooks who first taught me the “one million words” principle. It goes like this. After you’ve written your first million words, you are ready to start being a writer. It was true for me. If I ever write a book about my author journey and the craft of writing, you know that lesson will be there!’

It was interesting to read that The Wretched of Muirwood was something that he self-published, after writing almost a million words. This book is perfect for a young adult, or in fact anyone of any age, equipped with a great imagination!

Jeff Wheeler certainly has a gift, immersing the reader into a great storyline within the first few paragraphs, and leaves you devouring the novel page by page, unable to put it down for an instant. I thoroughly recommend it.