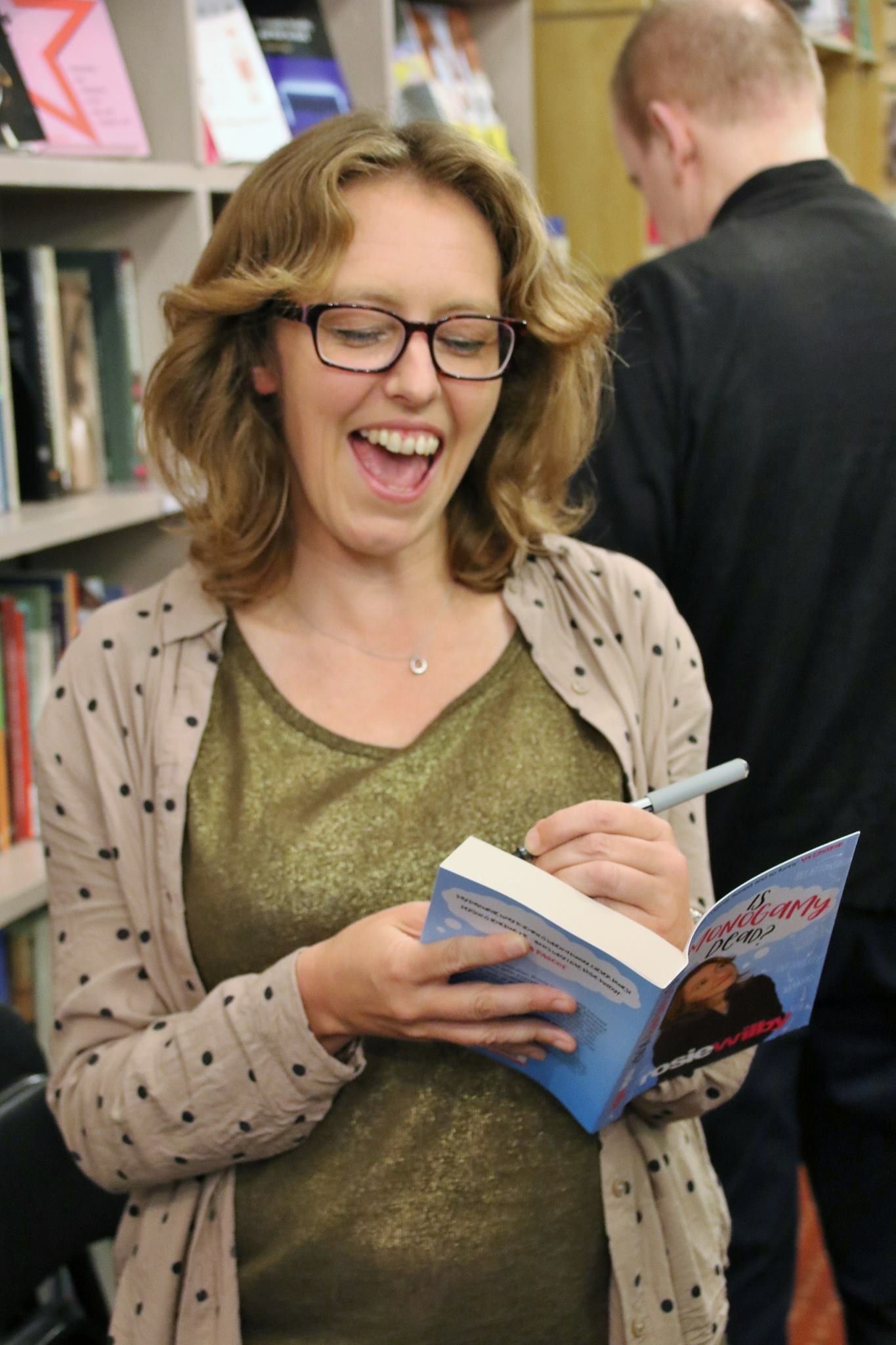 Your book Is Monogamy Dead? has made it onto the long list for the Polari First Book Prize, which recognises the best LGBTQ débuts published this year. Congratulations! Can you tell us about it? Have you a short extract to share with us? Where can we get a copy?

Thanks. It’s based on my comedy show of the same name which I took to Edinburgh a few years ago. However, I realised that I had lifted the lid on a very complex topic indeed. There was way more to say than I had the chance to in a fifty-minute stage show. So I began writing more serious articles exploring the real science behind why humans struggle with long term fidelity, then a TEDx talk and a Radio 4 Four Thought piece. Eventually, I managed to get a literary agent and a publisher. Although the book includes interviews with friends of all genders and sexual orientations, it is written very much from the perspective of a gay woman. I wouldn’t define it solely as an LGBTQ book, but that’s certainly a core part of my audience. I was delighted to feature on the Polari list as it also included Sally Rooney and a few other authors I really like. The book is available in all good bookshops (including fabulous indies Gays The Word, Housmans, Bookseller Crow, News From Nowhere, Lighthouse and Five Leaves) or can be ordered via Waterstones, Amazon et al. There’s an extract from the opening chapters available at Boundless.

You have written for many websites and newspapers including The Independent, The Guardian, New Statesman, The Sunday Times, Diva and more. What is your background in literature? Where/when did it all start?

It started when I moved to London in the mid-1990s straight after my degree. I threw myself into the music scene, joined bands and started reviewing gigs for some local London newspapers. Time Out’s then music editor Laura Lee Davies gave me a chance to start working for the magazine after I wrote a letter to her. That was back in the days when we were just before the Internet becoming a thing and Time Out was an essential part of getting around London.

You are also a stand up comedian, having appeared on multiple Radio 4 shows and at major festivals. What is your secret to a good comedy performance? What is it, do you think, that makes people laugh? The truth?

Yes I think there’s often an element of a ‘recognition factor’ and a sense of ‘oh yes, I do that!’, but it’s also very subjective. One audience might love you, and another hate you.

What is it like to perform at the Edinburgh Fringe?

Edinburgh Fringe is hard, hard work. Most comedians who go up are producing and marketing their own shows as well as performing every day. I’ve had some really fun experiences in years gone by. But sadly the Fringe has now become too corporate and the indie grassroots artists have been priced out of going.

Tell us about The Break Up Monologues.

Thanks for asking. The Breakup Monologues is a podcast that I created last year. It was inspired by the response I had to my solo show The Conscious Uncoupling, the final part of a trilogy about love and relationships that also included The Science Of Sex and the original version of Is Monogamy Dead? Lots of performer friends and audience members started telling me their own breakup stories and I decided that it might be worth opening up a space for a conversation about heartbreak and getting together and looking back and laughing at our actions as a therapeutic bit of fun and a way of feeling less alone. The full first series of ten episodes is available now to download for free at iTunes, acast, Spotify, tunein radio and all good podcast platforms. We also have two live recordings coming up on 5 October and 9 November at very swish London venue Kings Place. You can book for those at Kingsplace

What’s next for you?

I’m performing a funny talk about the book at festivals throughout the Autumn, including Oxford Science and Ideas festival, Cambridge Literary Festival and more. I’m also doing standup gigs in Berlin for the first time – at an English-language comedy night thank goodness! I’m seeking a commission, sponsor or funding for a second series of The Breakup Monologues and I’m gathering ideas for a book about breakups that will be a loose companion to the podcast. I haven’t started pitching that one just yet. It will be similar in style to Is Monogamy Dead? in that it’ll be immersive, narrative nonfiction where my scientific discoveries, interviews and ideas are embedded within my own personal journey.