Kev Milsom is in the relatively early-ish stages of his 5th decade. After spending years 16 – 49 engaged in various pursuits and careers such as photography, archaeology, driving, tutoring/teaching, administration, civil service, sales and other things, he reached his 50th year and firmly decided that life was far too short – thus making a devout vow to spend his time focusing on things closest to his heart and whatever made him happy. This spawned a path in chasing academic credentials, which gladly brought him into contact with other university folk chasing the same dreams. Even more happily, this led into gaining more confidence within the field of creative writing, leading onward into being published in 2012 with a series of poems. A further promise was made in 2012 to be published at least once a year, which Mr Milsom has kept to date, with a variety of poetry and prose published in various publications around the world. When he remembers (not often enough) Kev updates his creative writing news in a website called Views From An Acoustic Pineapple.

In September 2014, Kev joined the Ink Pantry Publishing team, where he still delights in interviewing writers/authors and reviewing creative works from authors both new and well-established.

In recent years, on the back of his creative output, Kev has also found the confidence to experiment with non-fiction pieces and has been fortunate enough to be published on several websites and within different magazines. This is especially valid within the field of parapsychology and the paranormal, which Kev has been studying for around 45 years. A series of books on this subject are being planned for 2017 and 2018. Kev runs a website called Paranormally Curious and a FB Page with almost 3,000 members. The main purpose of both is to inform and educate, particularly for anyone who is suffering from fear associated with the paranormal – or belief in negative aspects of the paranormal – by looking for rational/explainable answers.

Another field of interest for Kev lies within metaphysics and spirituality. Recently, Kev has started writing for a new magazine called ‘Empathy’ – a publication which explores human sensitivity and awareness. His first articles there will appear in mid-2017. A further book on elements of parapsychology is planned for 2018/2019.

Long term, Kev is also working on his first novel, a piece of historical fiction set in Bronze Age England.

Outside of writing, Kev has been married to Shirley for 28 years and hails originally from Bristol. He has many hobbies and interests, especially history, photography, astronomy and music, spending a lot of his 20’s engaged in musical composition, primarily within the classical/New Age genres – something he plans to return to in the near future when he can find the time.

Interest in the latter has been fuelled massively in 2017 as Kev has fulfilled a lifelong dream to become a DJ and now runs a weekly show on Radio Winchcombe every Friday evening, playing music from the 1970s & 1980s, in particular exploring key inspirations behind people’s musical choices and examining why music holds such an important role within their lives. 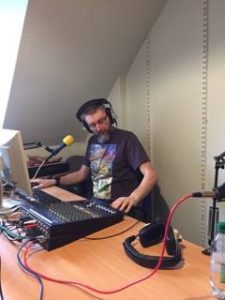