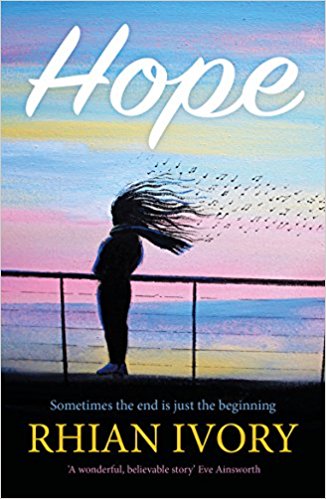 Plan B’s are for people who fail.

I just never, not once, not even for a tiny moment, thought that I would ever need one.

As a gentleman who relishes being honest and true to his word, it’s fair to say that the arrival through my letterbox of Rhian Ivory’s new novel, Hope announced a personal sense of mixed emotions.

On the uppity side, I’ve read Rhian’s writing before with her splendid 2015 novel, The Boy Who Drew The Future. I also met Rhian last year at Cheltenham’s Wychwood Festival and heard her speaking in gloriously enthusiastic tones about Hope, which was ‘mostly finished’ at that time.

Surely, both excellent signs that Rhian’s new novel would also set my creative senses alight, as her earlier novel had done so? Well…my initial response was more cautious and it’s also fair to say that my good lady wife almost took over the review, before I’d read a single page.

My solitary concern? The genre.

As a gentleman, my preferred genre(s) within literature fall pretty much within the same borders as my television and cinematic tastes. I’m not adverse to a well-written rom-com here and there (‘Love Actually’ and ‘About Time’, take a bow). I’ll even admit to sofa-dancing and singing off-key to a few, melodic musicals over the years, but it’s also fair to say that I do tend to fall back on my preset, safer preferences – usually involving fast action, invigorating car chases, starships on fire off the shoulder of Orion, C-beams glittering in the dark near the Tannhäuser Gate….that sort of thing. It’s also fair to say that I’ve never really tackled (or felt the desire to tackle) a young adult novel with a female protagonist, focusing on things that a young, female protagonist might be concerned about or engaged in. Might there be a car chase? Fisticuffs or football? Both?

‘Do you want me to do it?’ asked my wife helpfully, as she watched me pore over the back cover of Hope. It was a serious question, and, admittedly for a good three minutes I hovered between two answers.

Thankfully, by minute four, I’d remembered how good a writer Rhian is and decided to go all in, battle helmet on and wielding my finest impartial reviewer’s battle-cry.

How utterly glad I am now that I did so. But, let’s look at the premise of Hope and what it entails.

Hope Baldi is a young lady, whose ambitious dreams to become a student of acting/singing have been cruelly smashed on rocks of despair due to rejection letters from drama schools. As the book opens, she is on a boat, perched by a rail and staring into the sea. It’s not clear whether her intention is to jump, but nonetheless she is interrupted by the calming Irish voice of a young knight, Riley, who clearly recognises a damsel in distress when he spots one. Riley’s gentle humour, although thoroughly unappreciated by a dejected Hope, is enough to guide her away from the rail and thus, a fascinating friendship is formed.

The reasons for Hope’s despair soon become apparent. Her mother – a soul who doesn’t fully appreciate the depths to which Hope’s drama dreams reach – has given an ultimatum; her daughter can apply to five drama schools, in search of her odd thespian goals, but if nothing has opened up then Hope is to seek out a ‘normal’ life, away from acting. Hope has just received her fifth rejection letter and currently a deep, dark cloud of normality has fallen upon her; all ambitions broken and laying in tatters.

To make it worse, it also appears as if every single one of her drama friends are knee-deep in acceptance letters from various drama schools & academies and naturally engaged in lengthy celebration rituals and mutual, celebratory slaps on the back. Hope is fighting to keep herself afloat, while her world crumbles all around her.

To deepen the blow, Hope’s best friend, Callie (a strong and feisty character) cannot seem to grasp why Hope is so low, as she herself ponders over which drama school to attend. Also, as if this wasn’t enough, Hope has realised that medically she has ‘issues’; primarily associated with irrational anger.

Rhian’s novel becomes a journey of discovery for Hope, as she battles against depression, despair and illness. To accompany her, she has a rich, varied set of characters from the fields of family and friends; a key aspect of why this novel works so well. Career, illness, depression, love, friendship, family, dreams…all are covered in depth within the pages of Hope.

As previously stated, Rhian Ivory is a great writer. In Hope she brings out a full spectrum of colours for each character portrayed; each shining brightly at times with glittery hues, or displaying deeper layers of a muddier, unclear colour. The truth is that, as in life, each character possess their own flaws and weaknesses and Rhian is never backward in showing these levels to the reader. We get to see everyone for good, or bad and this totally assists us in being able to relate to them, as well as enhancing the main story of Hope Baldi.

The writing is…to put it simply; flawless. The plain beauty of Hope lies in the utter believability of everything; from the locations mentioned, such as the children’s ward of the hospital where Hope is destined to work, alongside her mother, to the realism of the many characters we encounter along the journey. It is also clear that Rhian has engaged in a great deal of personal research to bring everything together into one believable, honest package.

The plot-line is intriguing and never strays into the realms of dull, or mundane. This is also greatly aided by Rhian’s decision to keep the chapters short, so the pages soon begin to fly by and, if you’re anything like me, you’ll get to the end of one chapter and have to make that decision to put the book down to get on with daily life, or perhaps…yes…yes…I’ll just do ONE more chapter…or maybe two.

For me, the best sign of whether a book works is whether it engages with my brain. I found this almost impossible to put down and, trust me (I’m an honest man, see paragraph 1, sentence 1) I don’t say that very often. In fact, it’s a genuinely rare occurrence for me, but Rhian has managed it with ease.

A beautifully, brilliantly-thought out and thoroughly well-planned novel by a very talented and caring writer. Finally, a personal lesson. Perhaps, this is a genre of book that I would never have considered, had I glanced at it on a shop bookshelf. As previously stated, I am so very glad that I did, for verily I have been converted by the writing skills of Rhian Ivory. Amen and several hallelujahs!

Get your copy of Hope