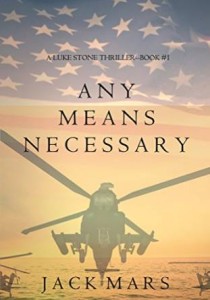 Any Means Necessary is Jack Mars’ debut novel; a political thriller about a terror plot targeting no less than the President of the United States. Nuclear waste has been stolen with the aim of creating a dirty bomb, and Luke Stone, an ex-SEAL now embedded within the ranks of the FBI, is called upon to stop the jihadists.

What follows is a fast-paced thriller with plenty of intrigue and backstory thrown in. We learn a lot about our hero’s past and follow him as he struggles to keep his family safe, while carrying out the task to which he has been assigned – even when that means bending the rules to breaking point.

For a first novel, this is an ambitious and complicated plot. There are many characters to get to grips with; as well as our ‘good guys’, Mars gives us some insight into the lives and motives of the other main players – the terrorists, the politicians, even those within the FBI trying to keep Luke Stone on a leash. The events which unfold rapidly from the first chapter are also quite a challenge to keep up with, and I found myself having to flick back a few pages to stop getting a little muddled at times! In addition to this, you have to suspend belief in what’s feasible when it comes to some of the ‘stunts’ our protagonist has to execute. Somehow, such ideas seem less acceptable from the pages of a book than on the big screen from Hollywood. Incidentally, this novel would probably make a great movie given a decent cast to make it more believable.

The dialogue is mostly snappy, without gratuitous profanity, but the narrative contains excess use of words like ‘BOOM!’ and ‘BAM!’ for my liking. I’m also not sure I can forgive Mars for using the line ‘Come with me if you want to live’ either!

If I had to name the worst thing about this book, it’s the cliff-hanger ending. By all means, hint at the possibility of future visits to your characters, but don’t dangle parts of a new plot in front of us and then cut us off.

For all my criticisms, I did really enjoy this novel. It delivered what it promised – racing action, moments of great tension and shock, and plenty of intricacies and twists to keep you turning the pages in the small hours. For a debut, it points towards a great writing future for Jack Mars.