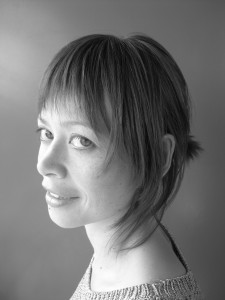 Hi Emily, thank you for agreeing to this interview. Can you begin by telling us a little about yourself?
Thanks for asking me. I am a writer and writing tutor, living in London. My most recent published work was a piece of travel writing set in Spain, which won the Telegraph’s weekly Just Back competition. I’ve also just finished a short memoir for the Tangled Roots project, which I’ll say more about later, and I am heavily into the editing stages of my second novel. When I’m not writing or teaching, I enjoy reading, and dancing, and riding around the city on the back of my partner’s motorcycle.

We must mention your first novel, A Tiny Speck of Black and Then Nothing, which came joint third in the SI Leeds Literary Prize, and has been shortlisted for the Yeovil Literary Prize. How did the story of Anna and Loll come about, and how much of your own experiences of Japan are in the finished book?

A Tiny Speck of Black and then Nothing ended up coming third in the Yeovil Literary Prize too, which was another bit of good luck. The beginnings of the novel’s story began to form in my mind while I was working in Japan in my early twenties, teaching English to high school students. The narrator Anna is also an English teacher, but my time in Japan was, thankfully, rather less creepy than hers eventually becomes. For the record: I never lived with a nightclub hostess, had a friend disappear, or found myself caught up in the criminal underworld of Ōsaka. On a different note, the traditional tales that my Japanese mother used to tell me were another huge influence that found its way into my book.

Do you have a preferred writing genre given that you have written novels, short stories, and non-fiction?

Novel writing is what I get up and do most days, but I enjoy writing non-fiction and short stories in gaps between drafts or just breaks when I need to take a breather from my main project. Shorter pieces can provide variety, but that isn’t to say that I find them any easier. I’ll sometimes write a short story in a single sitting, but it can take me months, even years, to get it into a respectable shape.

You are also an experienced tutor at City University London, New York University in London, and with the Open University. How do you schedule writing time into your day?
I write in the mornings and do other things – like teaching or admin or the ironing – in the afternoons. It wasn’t always like this. I’ve had all sorts of jobs in the past, working as a bookseller, a dental receptionist and a secretary amongst other things. I didn’t used to have this level of control over my time, but now I’ve reached the stage with my writing and my other jobs that I can organise my life in this way.
What are your favourite books and which authors have inspired you?

The Virgin Suicides by Jeffrey Eugenides, Notes on a Scandal by Zoë Heller, What Was Lost by Catherine O’Flynn and The Secret History by Donna Tartt are novels I could read again and again. Underground, in which Haruki Murakami interviews witnesses and survivors of Aum Shinrikyō’s sarin gas attack on the Tōkyō subway system, provides some fascinating insights into contemporary Japanese society. I’ve noticed that Murakami is very good at drawing out the extraordinary details of seemingly ordinary lives. The Pillow Book by Sei Shōnagon is another favourite, as is anything by Jean Rhys. I first read her when I was sixteen, and after that I never thought about the art of writing in quite the same way again.

Many of our followers are Open University students and/or aspiring writers themselves. Can you offer one piece of advice that you have been given or that you give your students to help stay motivated?
Keep reading and keep writing: it might sound as if I’m stating the obvious, but both of these things are so important. If you were a violin player, you couldn’t expect to be much good if you never found the time to hear other violinists playing, or didn’t bother with any practice yourself. It’s the same for a writer. Your writing can become hesitant and laborious if you don’t keep it up. Even if all you can manage is a matter of minutes per day, that’s better than doing nothing.

Is there anything you are working on at the moment that you would like to tell us about?
As I mentioned earlier, I’ve just put the finishing touches to ‘The Memory Album’, a piece that I was commissioned to write for Tangled Roots – a project of stories and events that celebrate multi-racial families and mixed-race people in Yorkshire. It is being organised by the writer Katy Massey. When she got in touch to ask me to be involved, I jumped at the chance play a part in such a worthwhile scheme. You can find out more about the project at http://www.tangledroots.org.uk/

Once again, thank you, Emily, for your time.

Thank you. It’s been my pleasure.