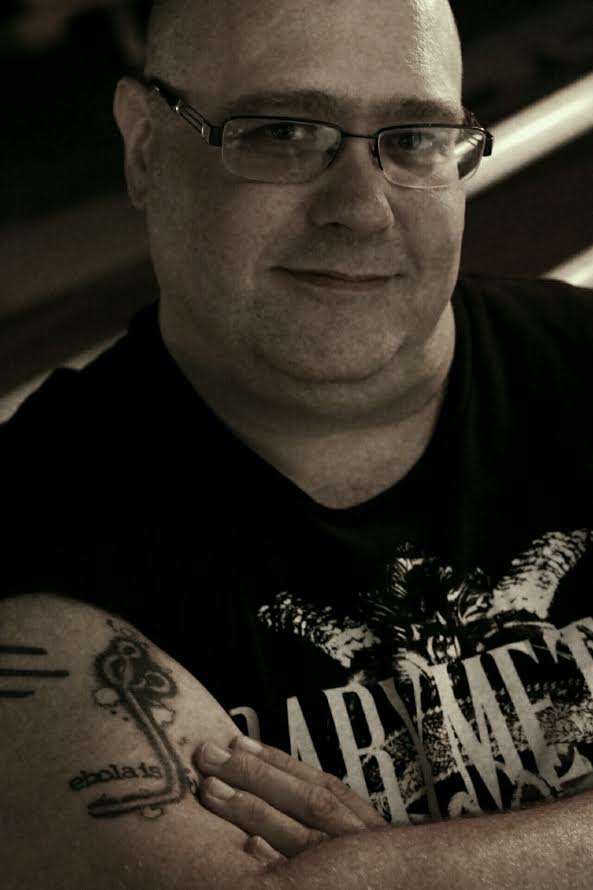 It continues. There have been points along the way when I have said “okay, I made it, I’m a poet now” – a lot of them clustered around the late eighties/early nineties (my early twenties, give or take). But if there’s one thing I’ve learned from the continual process of looking back at one’s old stuff–whether it be published or not–it’s that like anything else, a person’s art is mutable, and that doing this is a constant process of trying to make the next poem (or the revisions to the older poem) just a little bit better than whatever it was you did yesterday.

Which, I guess, with the context above, is an answer–writing as often as possible, and trying to ensure that what I write today is better than what I wrote yesterday.

[with the eternal caveat that “better” is in the eye of the beholder.]

You live in Akron, Ohio. What is the literary scene like?

Part of the reason I moved down here in March 2018 is that I discovered Akron’s literary scene, especially when it comes to poetry, has the same vibrancy as Cleveland’s did when I first moved to northeast Ohio in the mid-nineties. It’s wonderful to have a regular reading series to attend again, and there are a few others in the process of getting off the ground over the course of this year that look like they’re going to be regular. I’m over the moon with it.

You also, as you put it, ‘make noise’! Tell us about your noise.

How does one describe noise to folks who aren’t used to the idea of non-music as entertainment? [this is a much easier question to answer in the age of YouTube and Bandcamp, but bear with me.] I’ve always described noise as “imagine you’re in the middle of a firefight in a fully-operational steel mill”. While that only covers one aspect of the rather vast field of noise, it’s arguably the most representational, given that it’s a decent description of the most famous period of the world’s most famous noise artist, Merzbow. Given that I (like pretty much everyone else who does this) was profoundly influenced by Merzbow, it’s a good jumping-off point for describing my own work, but I try to run the widest gamut possible when recording–I’ve done CD-length pieces of minimal deep ambient, two-minute-long cassettes with ten discrete tracks in ten different subgenres, harsh powerelectronics… if it’s a recognized subgenre, I’ve at least attempted to play with it. Here’s a link to my bandcamp page.

I’m a programmer with a job a non-trivial distance from my apartment, so a good portion of a typical day involves either sitting in front of a computer or driving to/from sitting in front of a computer. When I’m not at work, there’s much less one can describe as “typical”; a given night can involve driving up to the Cleveland suburbs to spend time with my six-year-old, sitting on the couch reading for hours at a time, sinking deep into one of the games I play (there are a couple dozen I rotate between, but the current obsessions are The Witcher 3: The Wild Hunt and Tales of Maj’Eyal), watching movies ranging from the sublime to the ridiculous, cooking, any number of other options. The one thing that doesn’t usually happen is boredom.

Inspiration can come from anywhere at any time. Someone will say something in a particular way, I’ll catch a headline, a song will pop up I haven’t heard in a while… I just transcribed the last batch of poems from my phone to my computer, and among the inspirations were Robert Smith (lead singer for The Cure), Donald Trump, Yumi Hotta (author), Yanni (musician), Andrzej Sapkowski (author), Ricardo Islas (filmmaker), Charles Whitman (the University of Texas sniper from 1966), and my girlfriend, along with some “what’s mixed in with the “who’s (one poem was inspired by ADHD, for example). So… everyone, really, under the correct circumstances.

That “first publication” where they told you they’d publish you if you subscribed to the magazine? Yeah, that’s a scam just as much as the National Library of Poetry is. Hold out for another six months, you’ll get your real first publication soon.

(I’m ineffably happy I grew up when vanity publishing was a far more difficult and costly process than it is today. I’ve read a lot of POD-published volumes from people who likely felt the same way I did in my early twenties–that I’d made it, that I’d hit peak talent–and I have little doubt that some of them are already looking back on volumes published in 2003-2008 and saying “what in the world was I thinking?”.)

You walked away. I stayed.

Not as a writer, but regularly as a reader. When I still lived at home, my mother and I would go on book-buying trips during the summers to various places within driving distance of wherever we were living at the time; we’d spend a week in Philadelphia, or Maine, or Kentucky, or what have you, combing through used bookstores. I miss it; I don’t have the money to do a good deal of travelling now that I’m older, and I certainly don’t have the same kind of vacation time I did when I was in school–but used bookstores are much fewer and farther between than they were in the eighties, as well.

I can never remember who it was who defined poetry as “elevated language” (Eliot? Williams? Maybe even Whitman?), but the idea that language can be elevated is a powerful thing, almost to the point of being sui generis. And I hate to make proclamations like this, because we all have to know we’re still in the frying pan, right?, and there’s always another cliff we can fall off–but “now more than ever” strikes me as appropriate when it comes to elevated language in an age of fake news, alternative facts, homeopathy and flat-earth coming back into vogue, etc. Part of elevating language, to me, is honesty, and that’s something we seem to be rapidly losing sight of in America as we continue down our current path.

The same I wish I could follow myself. That internal editor who sits in your head and tells you everything you write needs to be as polished a turd as possible before you stick it on a page? Find a way to shut that idiot down, at least as long as it takes you to get something on a page. You can worry about whether there needs to be a comma between those two words later. Just write.

About a third of the way through John Ashbery’s A Wave, which somehow seems to have escaped me until now (I swear I read it in the nineties, but enough of it is unfamiliar that I’m questioning my memory).

I spent a great deal of time not writing and not submitting, as in “measured in years”; I was semi-retired from writing for twenty years (1994-2014, with a couple of relapses in there) and from submitting for even longer (1994-2016). So to an extent, I’m in the “what’s next” stage right now; I’m still not nearly as prolific as I was in the early nineties, but I’m at the point of writing every day again, and I’m two years into submitting probably even more than I did back in the days of envelopes and stamps. (It’s wonderful not to be budgeting for stamps every month. Thank you, Internet.) What’s next from here? To continue. And, as I said back at the beginning… to keep trying to get a little bit better every day.