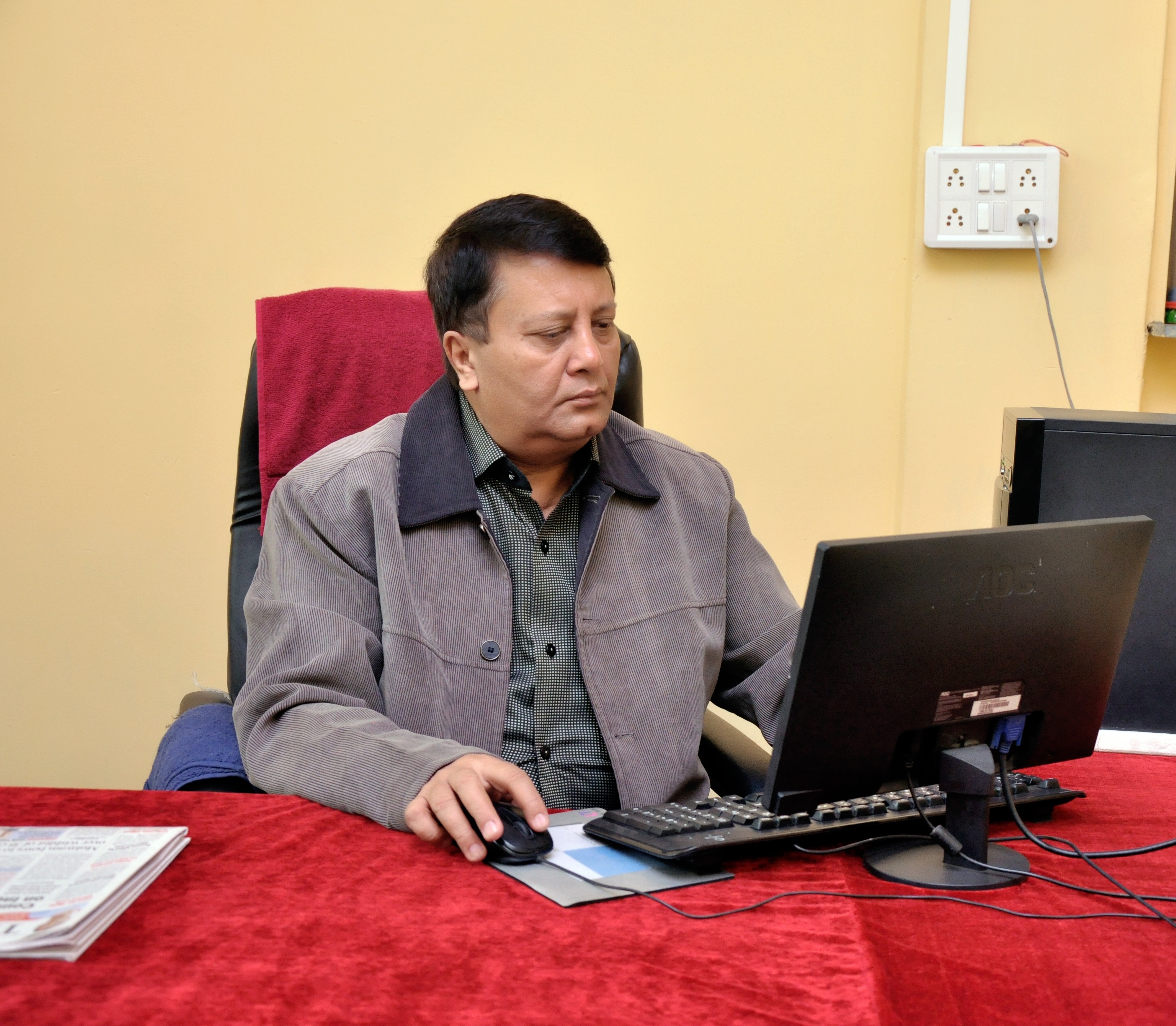 You are a Mumbai based senior academic, critic, literary editor, and author, with 19 published books. Tell us about your literary journey. How did it all begin?

Right from early childhood, I was interested in fine arts. Both mother and father were college teachers. Ma taught painting and Pa, literature. Picasso, Premchand and Dickens co-habited the same North Indian space. This love for things artistic and spiritual was my early legacy; a kind of teenage initiation into the higher realms of truth, otherwise obscured; a sacred exercise that allowed glimpses of parallel spheres out there in regions not accessible to eyes and mind ordinary; inaugurated new pathways, gateways and threw open hidden vistas; facilitated fresh perspectives and insights into a complex organic process called life. It is an amazing capacity of great art that is otherwise lacking in other fields or branches of knowledge.

The mint-fresh epistemologies prove empowering for the recipient and are conscious-raising in quality. The rare ability of an artistic artifact to open up spiritual dimensions for the disciple and simultaneously initiate a contemporary dialogue is, well, marvellous feature of such age-defying pieces. Art can renew the immersed and restore some sanity in an absurd world, thanks to the post-reading or viewing activity. So the fascination with such an art continues.

In a rough chronology of sorts, in a brief recall, I can safely say that I began writing from college days, some juvenile stuff, first standard you have to pass in the journey onwards as a writer. It was not satisfactory phase, it can never be. Dearth of life- experiences made these outpourings immature, sloppy, sentimental and raw. It lacked depth and distance, crucial for serious art.

Subsequently, harsh realities of a middle-class existence, in a post-colonial nation, took over imagination and cooled down the ardor for art that hardly pays in an anti-art market that tends to favour and promote best-sellers selling fantasies. In my 30s, I moved to Mumbai in search of a job that could pay for mounting bills. Mumbai is also a mega magnet for the poor, disenfranchised, the unemployed and dreamers, apart from the powerful and wealthy; it is powerful financial hub of the country and home to Bollywood, a powerhouse of ideas and talents with or without inheritance. I found home in a hospitable city, the most cosmopolitan and professional one in india, despite heavy constraints. Later on, it became my Muse as well.

Due to early lack of opportunities, I could not focus much on writing—no point in writing, when it does not get a reader somewhere, some place. Meanwhile, I began freelancing for major English daily. In the 1990s, many publication avenues were made available, courtesy the borderless revolution, officially called the Internet, the most liberating moment in the history of human civilization. Although, it presided over the slow and painful death of print, Internet also released the publishing space from the limited tyranny and limitations of print. Now, you can soar easily the stratospheres of the cyberspace spanning the global village and reach out its any corner. That sudden high-tech window motivated me to write again for a large, almost global audience.

Last 10 years or more, I have been publishing consistently. My tryst with art continues.

It is my means of survival in the midst of a frightening market economy that produces nihilism and cynicism of another kind.

How did you become involved in Setu?

It was accidental. My cousin Anurag Sharma—a gifted bilingual writer and IT wizard— called up from Pittsburgh, USA, one day and during a long conversation, we decided to launch a bilingual e-journal to be published monthly from USA. It clicked and the expedition began. It is our third year and we have got more than 4 lakh (100k) page hits!

We, through Setu, are building bridges of understanding across cultural geographies. That is the primary task of a bridge (Setu in Sanskrit).

A remarkable journey! Patronage by readers, fellow editors and writers have helped fuel this strange trajectory in a busy space.

What is it you love about poetry? What kind of fiction have you written?

Poetry is a refreshing breath on a clean-air day, a rare Sunday outing probably, some place outside the metro full of smog. It rejuvenates the innards and heals the fissures. It makes you whole!

My fiction explores the underbelly of development and growth and is often literary, referencing other writers that have stayed on with me for last 30 years. It questions state narratives and tries to subvert the status quo.

The underdog is my enduring concern; the insulted and the humiliated; the voiceless. The threats faced by liberal-humanism. Increasing racism and fundamentalism. The rightist forces on ascendancy—these have to be resisted and reversed through writing and praxis. These are recurring concerns—nightmares visited again and again in a glitzy mega-polis.

Can you share with us one of your poems? What inspired you to write it?

Sure. A published poem, my personal anthem.

Near the Great River

In the rhythms of the Great River
Embedded/sedimented: Ode to Joy
Symphony No 9 in D minor, among other artifacts.
Be embraced, you millions!
This kiss is for the whole world!

How refreshing the lines from earlier!
How different now— the millennial universe!
Hate-filled, bomb-driven, suicidal killer!
What a moral climb-down!
The post-Renaissance poor inheritors!
The Great River carries the old treasure
Disseminates the joy and thrill
Of voices, lyrics and compositions that
Capture the best of this world!
Rest—on us!

Creative Talent Unleashed: Near The Great River by Sunil Sharma

Both Schiller and Strauss inspired this poem and the inspiring message of oneness of humankind is still relevant and needs to be urgently re-enforced in a divided world of hate- mongers and solo merchants of death and mayhem, wanton acts of violence done in the name of one God and religion, laying sole claim to truth and salvation!

You were involved in the UN project anthology in 2015. Please tell us about this. What advice would you give to our followers in submitting work for consideration? Are there any places you would recommend?

It just happened. I was surprised when I got an e-mail from their New York headquarters, inviting me to make a poetic submission. I thought it was some prank or a fake mail but a fact check proved it to be genuine. It was claimed that I was one of the three Indian poets selected for this unique anthology on happiness. It was pure nirvana for a solo and suburban writer, my fifteen seconds of fame!

Follow the guidelines and deliver something cracking with energy.

There is one place I know intimately and it is also most welcoming— Setu that I edit. There are other venues in the cyberspace—some pretentious, some real sober; others pure snobbish—you have to find out what works best for you and what not. Archived sections help to understand the personality of the journal—and opening remarks of the edit team!

A working day starts at 7.15 in the morning in Kamaladevi College where I am principal. There I supervise a young team of pros. Interacting with learners is a real pleasure. Late afternoon, I return to my suburban home. The day’s sojourn ends at late night. There are typical daily pressures, deadlines and short-term timelines; challenges of a campus and civic life in an Indian metro bursting at its seams and due to poor planning; a brief nap, followed by a long evening walk and then few hours of reading and writing, before/after quick dinner.

And occasional Hollywood on prime-time TV—no binge-watching the idiot box. A daily routine of ordinariness and frustrations, interrupted by sublime moments of creation. In a pedestrian world, each creative becomes another Maud Lewis, or, almost.

Hatred. It has already resulted in lot of bloodshed and loss. It is an insanity that needs to be checked universally in every epoch.

Humanity. An apocalyptic world has got no appeal to me. Real lucky to be born into a species that has evolved and produced great artists, philosophers, doctors, sports persons, gurus and scientists, not necessarily in this order. Homo sapiens have made tremendous advancements and taken the civilizational project to a higher level. Politicians are trying to destabilize that order.

Rainbows are multinational and immortal!

Writing is a demanding craft. One has to work hard in order to achieve a certain level of perfection.

Currently, I am reading Dostoevsky’s shorter works and enjoying them for their dialogic quality. I am revisiting the Master after thirty years and trying to learn afresh from a humble distance. The way he captures the darkness of the Russian landscape and its soul is, well, simply breathtaking! He is a summit that has not been surpassed so far. Towering Tolstoy, of course, is there, but his gaze is in a different direction.

Planning to bring out my next book of poetry, soon. Then, a collection of shorts by the end of this year.