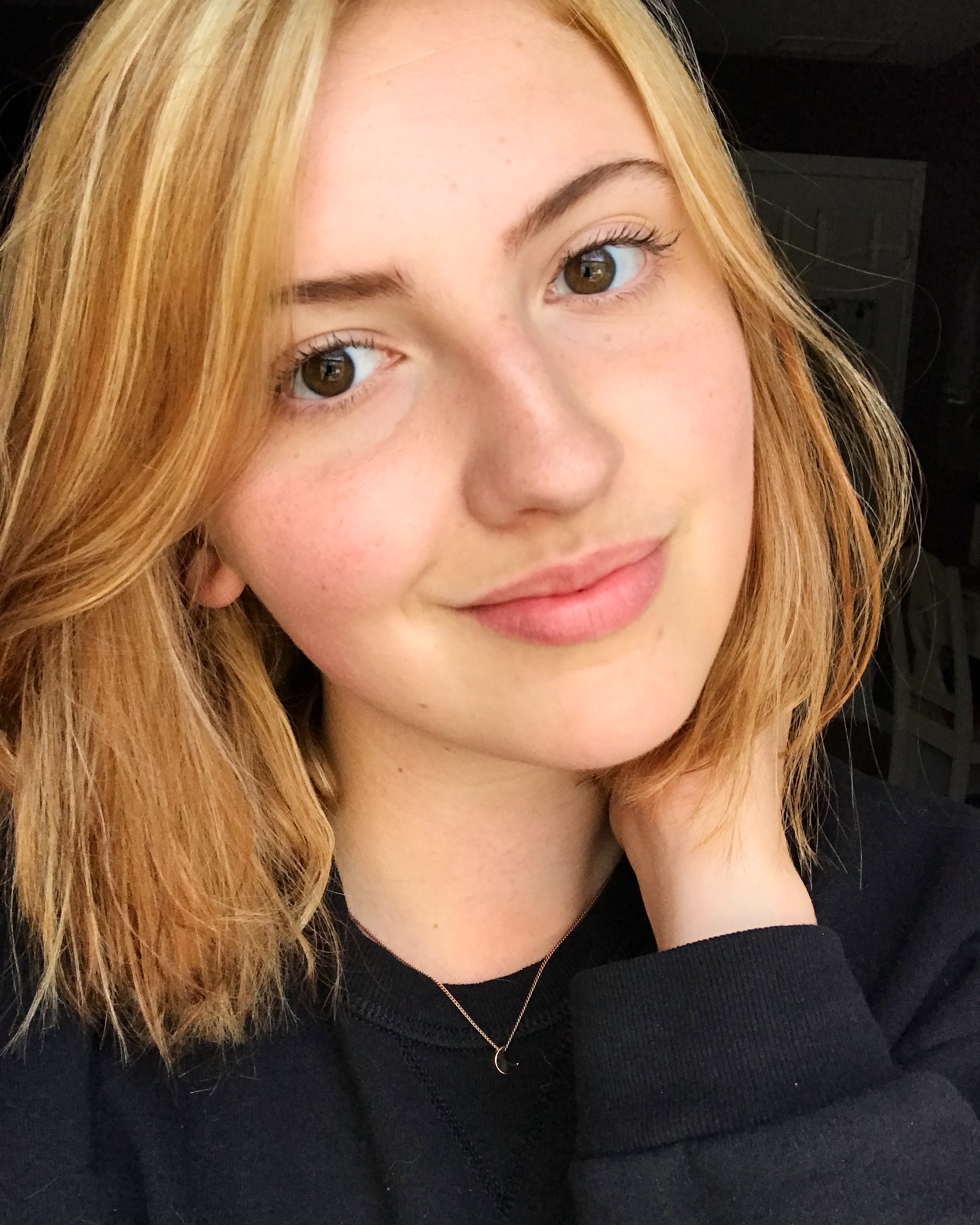 You are a junior majoring in English at Montclair State University. What texts are you studying?

Nothing currently. I just finished a semester abroad with Semester at Sea, so my English classes on the ship mostly focused on literature from all of the different countries we visited. At my home university, however, it depends on the class, but I mostly study poetry. This coming semester I will be studying YA Lit in one of my classes, which is exciting. My favorite book I’ve studied so far, I think, is Ghana Must Go by Taiye Selasi. It was very cool to read and fall in love with a book I was studying, then have an opportunity, by some twist of fate, to visit the country it was written about. I am so lucky to have had the opportunity, as a student of a major that primarily works on paper, to experience the physicality of my studies; witnessing the things one reads and dreams about is a rare and beautiful thing.

I think I value poetry over other kinds of literature because there are no rules unless you want there to be. Poetry is literally open-ended, it can be anything, it is anything! I think I like setting my own limits, being able to break them on my own terms, and following behind the narratives I write as they manifest in front of me, no matter where they take me. The possibilities are endless, and I think being able to create something out of nothing with any kind of comprehensive narrative, not to mention a good something, is a skill I find invaluable, and I wish others saw the merits of it that I do.

Another thing I love about poetry is how diverse it is. The term “poetry” encompasses a lot, and like everything else in the world, it’s not for everyone, but only in the broad sense. It’s not for everyone in that not everyone is going to love everything. There are so many different kinds of poetry and poets out there; odds are if you don’t love one thing, you’ll find something else that speaks to you. The most frustrating thing is the misconceptions people hold about poetry that keep them from exploring the genre.

I mostly write about nature and the relationships in my life, though after this most recent chapter, having circumnavigated the world on a ship, I find myself writing a lot about travelling, the ocean, and my perspective as it’s changed while I was voyaging. I care about my place in the world, that of other people, and the unfathomable diversity of the world. I’m in this transitional period where I’m slowly but surely becoming an adult, and so all the angst has been taken out of my literary sails; I’m much more grounded and aware, I think, with my ponderings nowadays, and I consider each poem a pondering, a grasp at the answers to questions unknown. I care about a lot of things, and it’s hard to condense that into a more tangible passion, so that it becomes something that manifests in my art, but I think the core of it might just be humanity and all of the nuances of being a person.

I think technology is having both a positive and negative impact on society. If we look at social media, for example, on the one hand it promotes interconnectedness and communication, and for some speaking through social media can give them a voice they might not otherwise have. I also think there’s something to be said about the ability to communicate with someone on the complete opposite side of the globe with a tiny little rectangle you can fit in your pocket. It is becoming extremely special to me to be able to communicate readily with the people I have met in my travels, as well as my old friends, each of us scattered to different corners of the country after graduating high school and going off to college. Social media is also an incredible way to spread information; I don’t recommend using something like Twitter as a news source, but there have been times where I wouldn’t have known that something was happening (and then gone on to research it on my own) if I hadn’t opened my social media. Inversely, social media does, at surface level, appear to be an abyss of nonsense, and the more trivial things are obviously a negative contribution. This goes for all kinds of technology, I think. For every advance it provides there’s potential negatives. I think it comes down to the manner in which we use technology, which ultimately is up to you, and the very least we can do is keep our feet on the ground while our heads are in the clouds.

As of right now, my life has recently taken a startling, brakes-screeching halt. About two weeks ago, I was still riding the tail end of a 112-day-long voyage around the world, to 12 different countries across Asia, Africa, and Europe, barely even stopping to breathe. So, I think it’s safe to say the “typical day” is ever-changing for me. The contrast between the full-throttle of non-stop travel and my sedentary home life has been a culture shock in itself, but a welcome change. Right now, my typical day consists of me meandering awake at my leisure, nowhere special to be, drinking at least one cup of coffee before getting myself ready, and the rest of the day is a product of my to-do list. Lately, I’ve been grabbing meals with friends as they return home for the summer, though when I have no plans, I find myself either reading or writing. My house is on two acres of woods, so I spend a lot of time doing so outside while my dog, Angel, romps around the yard. The end of the day is normally spent either out with friends or facetiming the friends who live too far away to visit. I wouldn’t say this is normal for me, but I am in a particularly transitional time, and it’s looking like this is what the summer will be for me.

I think this question would have been easier for me to answer four months ago. That being said, I don’t know that I have an answer to this question. It’s hard to think of one singular thing that wouldn’t cause literally every other aspect of existence to change along with it. In the interested of keeping things simple, I think I would change the way language barriers affect communication. I’m not sure how to go about this – it hasn’t happened for a reason, right? – but assuming my answer doesn’t need to make full sense, I would want the differences in language  between people to be less politically and socially charged. The root of any kind of negative interaction, I’ve found, is misunderstanding, so if we could somehow minimize the misunderstanding in interlanguage communication, I think the world would be a much better place.

I think the people who inspire me the most are my friends, to be honest. It’s really important to me to have a support system of people who raise each other up and cheer each other on. Knowing that at least one person loves and appreciates the effort I put into my work keeps me going. My mother also inspires me, but in slightly different ways. My mom stayed at home with my sister and I until we were maybe 12 and 14, simply because she wanted to watch us grow up. Before that, she was a full-time accountant, then became a lunch lady at our school so that she could still be home for us if we needed her. Once we were mostly self-sufficient young adults, she decided to go back to work as a bookkeeper, and she now has her own company. My mom taught me that there’s no right or wrong time to do something big and milestone-esque in your life. Watching her professional journey showed me that I can do everything I want to do in my life, that I have plenty of time to accomplish everything I’d like to accomplish, and that there’s no shame in doing what you feel is right for yourself, even if it goes against the vision of the path everyone else might have in mind for you. Ultimately, she taught me that it’s my life, and I should do with it as I see fit.

I think so, yes, in two different ways. The first has been about me moving away from YA as I get older and learning what kind of stories I want to not only read, but write as well. This particular pilgrimage has been forcing me to look at things from all different perspectives, and I think the more literature I consume, the more I shape my own perspective. The other pilgrimage I’ve been on is immersing myself into the world of poetry in general. It’s so hard to get into something like poetry, and for me, it took roughly three years to find where I fit into the fabric of it. Poetry is such a big, daunting world, there’s so many different kinds of poetry, and if you have no idea where to start it’s hard to guess and hope you find something that speaks to you. All of this, especially because poetry books are so expensive. I am still very much growing into poetry and trying new things, trying to find more things that speak to me, but for the most part it feels more like a fun adventure now that I mostly know what to look for, as opposed to an intimidating task I really had to push myself to work at before.

I am currently writing two different books at the moment, both of which I hope to have published eventually. Both are inspired by, and a product of, my Semester at Sea voyage. The first is a collection of poetry I wrote while on my voyage. I somehow happened to start a notebook on the first day of my voyage and end it on the very last, which is the happiest accident I’ve enacted, I think. So I have been attempting to edit a full notebook’s worth of poems into a comprehensive collection. I have also been working on a short story collection about different kinds of stray animals I noticed in some of the countries I visited on my voyage. I’m planning on writing it from the perspective of each different stray – each chapter will be a different animal from a different country, and I’m going to attempt to thread myself and sometimes my friends into the background of each story, almost like a cameo, so that you can follow my path as I progress along my journey. Other than that, I’ve been writing like the wind and trying my best to get some stand-alone pieces out there.