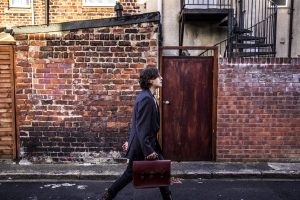 You are the world’s first Door-To-Door Poet! Can you tell Ink Pantry about your journey towards this great title? 🙂

I’d always had the feeling poetry could be enjoyed by more people. Often the impression given in school is that it has to be written in a confusing language about things that happened hundreds of years ago. And this turns a lot of people off it forever. But I thought if I could get five or ten minutes with someone like that, show them what I do and then write them a poem about anything they like, they’d enjoy it. I just had to think of a way to find them. Knocking on doors seemed like a really immediate way of doing it.

What was it like performing at the Glastonbury festival?

That was a Hammer and Tongue poetry slam. I’d won the semi-finals at the Edinburgh Fringe, so I got invited to the final at the Albert Hall. It sounds a lot more impressive than it was really; I was on stage for all of six minutes. But it was a nice day out. My parents were very proud.

What is the poetry scene like in Newcastle Upon Tyne?

It’s crazy, and I love it. I’ve heard people complain that it doesn’t really have an identifiable ‘voice’ in the way that, say, London has its Kate Tempest ‘voice’; and this is used as an example of why we don’t really know what we’re doing up here. But, to me, that’s our great strength. We’ve got people working with lots of different tones and styles so, if you get all of them in a room, it’s a real melting pot of ideas. From the spellbinding, ethereal Kirsten Luckins, to the stand-up ramblings of Scott Tyrell, to the rhyming insanity of JaZZ RiOt. Newcastle’s where it’s at, man.

Tell us about ‘Red is the New Blue’.

Ha ha. So Graeme Thompson from Live Theatre called me, Matt Miller and Matilda Niell into a room a few years back and said he wanted us to co-write and perform in a play that had some poems in it. I told him I didn’t know the first thing about writing a play, but he said he could sort that out. He put us on a course with the lovely Gez Casey, and, every week, I’d go along and learn a bit more about how to write a play, all the while trying to write my own. I felt a bit like a monkey at a typewriter.

I mentioned the Mars One project out of passing – the plan to send ordinary people to live on the red planet by 2025 and to televise the entire event. Matt said: ‘That’s what it should be about!’ So that was ‘Red is the New Blue’. It followed three hopelessly flawed people on their way to Mars, and you gradually find out what all of them are running from. It was also kind of about what happens when you put profit-making companies in charge of scientific discovery. 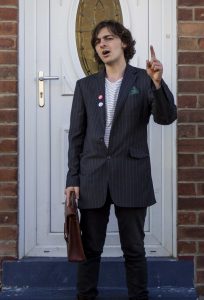 Who inspires you? Have you a favourite poet?

Loads and loads. One of them is Ross Sutherland. I saw Stand by for Tape Back-up at ARC Stockton a few years ago, and it just totally blew my mind. Lots of the Aisle 16 collective really, Luke Wright, Tim Clare – the way they blend everyday culture with big issues, but in a way that’s completely unpretentious. I think that’s the space poetry should occupy. It can be about things that are incredibly important, but it can be entertaining and accessible as well.

What things do you care about?

Wow. Erm… OK. Here is a list of things I care about, in no particular order:

Writing poetry. Skinny jeans. Hunter S. Thompson. My family. Composting. Affordable housing. The ever-widening gap between rich and poor. Biscuits. My girlfriend, Rose. Immersive fringe theatre. Those hybrid sponges that work as a scouring pad. Making cities more bike-friendly. Crufts. Playing guitar. Lazy summer days in Heaton Park. A real living wage. Getting off a metro and then catching the next metro so you don’t have to wait on the platform. Ale. Friends. Destroying fascism. Eccentric hats. Watching bats fly above you in the soothing Italian dusk. Yo-yos.

You’ve collaborated on a film for Channel 4’s Random Acts. What was it about?

It was about Door-to-Door Poetry. Matt, who I’d worked with on ‘Red is the New Blue’, had said he wanted to do some directing. I noticed Random Acts were open for submissions and they help people direct their own short films. So, I told Matt he should make a film about me knocking on some doors… which sounds incredibly arrogant now that I write it. But he likes Door-to-Door Poetry; he’s gave me lots of advice about it from the start.

Have you any advice for budding performance poets?

I would make people less afraid of strangers. It’s hard, I know; strangers have done some pretty shitty things to me in the past. But, I think, generally, people are a lot more kind and caring than we’re led to believe. And they often do bad for a reason. If the news spent an equal amount of time telling us about caring stuff people had done, as well as all the horror, we’d feel a lot less frightened and a lot more inspired about life. But I don’t think they want us to feel like that – we might start changing everything. 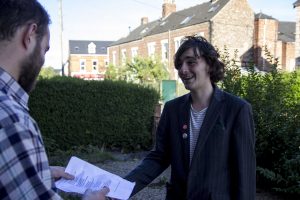 Can you share with us a couple of your poems?
Yeah, I’d love to.

There’s a doctor in North Shields

and preaches power to the people,

his name is Doctor Dave.

he wears the same beret.

If you want kebab and chips

and you don’t want to hear the risks

of it daily slipping round your lips

he’ll say no more about it.

He’s not going to lecture you

until his wised cheeks turn blue,

there’s loads of options there for you

but he’s not going to shout it.

he won’t say you need to behave

or stop you going to a rave

in a snake infested bog.

You could smoke 50 a day

and give up walking for Segway

while sniffing lines of pure cocaine,

guilt tripping’s not his job.

I know there’ll be some people who’ll

that Doctor Dave’s so liberal

when it comes to giving lessons.

Their heads will shake till they spin off

and just before it they will scoff:

“Those scumbags need a telling off!

But from each shivering student drinker

out without a coat in winter,

who didn’t want so long,

we spend the most time in the grave

and no one ever changed their ways

because they heard a doctor say:

“I’m right and you are wrong.”

A girl who’s allowed to be seen and heard

A girl who knows she could play football

Against the hardest boy in the class

And tackle him before he has the chance to pass

Sprinting the length of the field to score a hat-trick

Knows she could be a mechanic

Or the world’s best Formula 1 driver

And even if that’s not what she wants

Knows she could easily parallel park

Who at 16 wins arguments with socialist politics

Who understands lads who interrupt her

A girl who knows cooking and cleaning

Aren’t jobs reserved just for her

A girl who feels sorry for those that say

They only dream of their wedding day

Who keeps a space saved for an act so great

It helps to make the world a better place

With the strength to filter out the pressure

From every advert and newspaper

Telling her she’s ugly and the wrong shape

A girl who’s not afraid

Of her gender or her sexuality

Knows either of these could change their name

And she’d still be loved by her family

And I know she won’t find it easy

She’ll have to make choices

In a world that’s geared to make her fail

A world that grabs and intimidates

But I want to help raise a girl

Who knows the difference

And doing what’s best for you

Between making a choice

And doing what you’ve been told to

I’m really hoping to take Door-to-Door Poetry all around the country by autumn of this year, to prove anyone can enjoy poems and that strangers really aren’t as scary as they seem.

I’m also going to do a show about what’s happened to me so far at the Edinburgh Fringe in the summer. I’ve got loads of stories I want to tell, from my trip down to the Byker Wall – an area synonymous with crime and violence – to visiting a mosque for the very first time. It’ll be running from the 5th to the 27th of August at the Banshee Labyrinth at 4pm every day (apart from Thursdays). If you’re around, get yourself down. It’s on the PBH which means it’s free entry too!