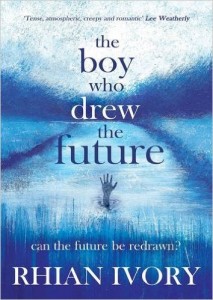 ‘They pushed us onto the street. Maman said they’d called her a “sorcière”, a witch, told her they’d heard the rumours in the village. The fat one pointed at the road to Halstead.

“Look for a tall building with gates and ask to see the Guardians, maybe they’ll believe you when you write ‘widow’! Or maybe they’ll put you in a yellow jacket along with all the other sinners,” he shouted at us, laughing.

They said more things about my father that I didn’t understand, harsh-sounding words Maman wouldn’t let me ask about. She waved my questions away, muttering curses under her breath as we stood outside wondering where to go.’

It’s 1865 and Blaze Ambroise, a mysterious boy of teenage years and French descent – along with his canine companion, suitably named ‘Dog’ – are squatting in an old manor house in Essex, England. Recently orphaned and impoverished, the boy is shunned by the locals, except on rare occasions when they require assistance via his deft skills in herbalism and healing. On other occasions, his unique talent at prophecy comes to light whenever he is given a pencil and a piece of paper. At such times, Blaze and Dog are given food and aid and hounded for psychic answers to the personal problems of the selfish town populace, before once more being shunned by those he has assisted and left alone.

Over a century later, a teenage boy named Noah Saunders is moving around the United Kingdom and enrolling in many new schools, due to his father’s work as a photographer. His one desire in life is to find a sense of routine normality and now, having just moved to Essex, he is hoping to put a troubled past behind him…although a ‘normal’ life always seems to escape his clutches. Could this be due to his mysterious propensity for intense empathy with others, as well as the ability to draw unusual drawings that appear to foretell the future of other people?

And so we are introduced to the two compelling, main characters in Rhian Ivory’s novel, The Boy Who Drew the Future, each sharing similar, eerie qualities and coincidences that bind them quickly into memory.

The style of the book is refreshingly simple, with two sets of first-person narratives being told one at a time. Therefore the reader gets a chapter of modern-day Noah, before switching back to the 1860s with Blaze and Dog in the next chapter, and so on. This structure allows the reader plenty of time to adapt to the similarities and differences between the two characters and their personal accounts; but what really hits home from the very first page is the brilliant standard of writing being demonstrated on the pages.

Simply put, Rhian Ivory’s descriptions are masterful. From describing locations and objects, down to her vivid portrayal of people, Rhian excels at inviting the reader into every scene and using her skill as a wordsmith to alight our imagination. Most importantly, for us student writers who dream one day of attaining success and aplomb within our writing careers, this book is a true masterclass in how to get it precisely right – how to lay out simple words and sentences into truly compelling literature and draw the reader effortlessly into the story with an easy, delightful flow.

‘The inside of the circle was dull and worn with time as if it had rested on many different fingers over the years. I wondered who had worn it last and who would wear it next. I could sense it wasn’t new. It felt weighty as it sat heavy in my hand, full of history. I clutched it, my fingers closing around it like a secret. I imagined the green glowing through my skin, lighting me up, like an emerald fire that could burn, marking me out as a thief.’

As readers, we are effortlessly transported between centuries, alternately following the very real, life-threatening dangers faced by Blaze, before swinging back to the modern day, where Noah’s tensions lie more within school, with new friends and ground-shaking emotions to deal with. As the book unfolds, we are kept wondering on the mysterious connection between the two, young individuals. In achieving this balance, Rhian Ivory doesn’t waste a single line of writing in holding us tightly to her fascinating story.

An absolute gem of a book.