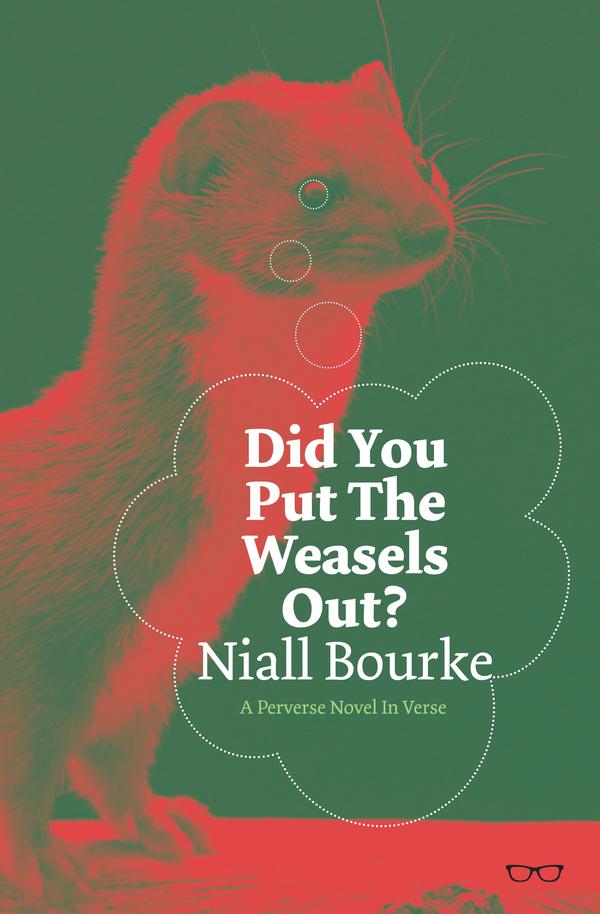 Niall Bourke’s poetry novel Did You Put The Weasels Out? was a hard one to review … because there were so many lines that I wanted to quote that I nearly ended up quoting the whole darn thing! I confess that I love novels in verse. The first poetry I ever owned was a copy of Sir Walter Scott’s verse novel The Lord of the Isles which I bought aged 8 from a school jumble sale for the princely sum of 2p — its poetic images captured my imagination.

Available from Eyewear Publishing, Did You Put The Weasels Out? is Niall Bourke’s début poetry collection and it is a novel in verse. Even the numerous footnotes are in verse. It is an impressive undertaking and is written with aplomb.

it is worth getting the following out in the open:
his oaty breakfast resolve has broken.
That is: he usually eats porridge but, and without warning,
has decided to have toast this morning…
…But there is no bread!

The protagonist of the poem is Mark.

I chose my words, whetting them
so they came out edged. I chose them
so they slotted out flat and cornered,
like the tray under the toaster that collects the crumbs,
And I delivered them
in between your fourth and fifth ribs
like I was sliding in that rusty fucking crumb-tray
to collect the little croutons of your heart.

This is a story infected by science:

(Seconds dictated by the rate
Caesium atoms dissipate )
[…]
Elsewhere in the cosmos, perhaps,
Electron death is not so sure;
Jobs and work-days would collapse,
9 to 5’s could not endure,
Dependent on what weird speedings
Atoms release their quantum seedlings.
Death to Chronos, whose scything hands
Control our lives!’ Mark demands.
But, on arriving late for working,
He sees that here on earth the clock
Still roars a tyrannical TOCK
And mechanic tick, as, irking,
Red of face and unimpressed,
His boss stands waiting, by his desk.

Sometimes the difficulty with end of line rhyming is that the words can seem a little contrived in order to create the rhyme. Here at the start of section VIII of Part The First is one that I felt a little forced:

‘Why did you leave old Dublin city?
Was it to choke on swallowed bile,
And wallow in your own self-pity,
You left behind the Emerald Isle?’

But just 5 lines later we get this fantastic slant rhyme

He works hard, earns good wages
Has good friends and pays his tax

If you read that on the page it can be easy to miss the subtle rhyme between ‘wages’ and ‘pays his’ which is why this story deserves your time to absorb the full flavour by hearing the words as you read them.

It’s very Dylan Thomasesque in the characters and tales, evoking Under Milk Wood. This section, which first introduces the title of this book, being a perfect case in point:

the lad with the ferret on the sparkly lead who always
buys four Carling and a six-pack of rashers,
that degenerate Toes who drank himself legless the night
he fell asleep in his own bonfire and the shins only burnt
claane offa him, his total spunksprout of a father who
turfed Toes out on the street after the sixth time he’d
pissed the stairs while trying to crawl to the jacks, your
wan who lived only on cider and porridge for a whole
year and contracted the first case of scurvy since 1837, that
chap with the wife who looks a bit like a curtain, the poor
auld Sniper’s Nightmare who got polio when he was little
and now zig-zags up the street, that quarehawk who sits
on the wicker chair in the sweet shop muttering did you put
the weasels out?

Maybe not so politically correct these days to describe a man who had polio as a child as a sniper’s nightmare, but in the same vein as Thomas’s Evans the Death (the village undertaker), Organ Morgan (the church organist), Mrs. Organ Morgan (his wife), Ocky Milkman and Butcher Beynon.

I found a section about a ‘symphony that has been written by a foot / when its sock has fallen down below its heel’ and performed by household appliances — an open beeping fridge, microwave, ‘the dishwasher pipes up with its falsetto’ with a tumble dryer completing the quartet — as fascinating as Hungarian composer György Ligeti’s Poème Symphonique for 100 metronomes; sometimes it’s the new perspective on everyday domestic scenes that can make you see things differently.

If we pan up along the stairs
We can now watch them, unawares,
Snuggling down under cotton seams.
Around the house, cooling lightbulbs clink
As outside orange streetlights wink
Against the night. Jen turns in her dreams.
‘Did you put the weasels out?’
‘I did,’ says Mark, ‘without a doubt.’

There is a continual sense of humour bubbling through the story, such as when the character Lushy pops into a bar for a pint

‘Ah, sure, one’ll be grand.’ And sure, just one
woulda been grand. Maybe even a couple
But it was the twelve that got him buckled.
[…]
but enough sense
still to realise that vengeful recompense
would surely be paid if he dared return
to Bernie empty-handed and so, taciturn
with woe, but not ready to admit
defeat (meaning her going pure ape-shit)
he concocted an ingenious plan of attack:
a large sausage supper from Wonder Macs

which all goes wrong after he stops to take a drunken piss, placing the chips on the ground whilst he does.

that some quick relief
would help him avoid the aperitifs
of Bernie’s anger as then he could billow
in, leaving the supper on her pillow
as a deft anniversary surprise,
before sneaking down and inside
the sheets like he’d never been out on the tear.
[…]
But wasn’t Lushy forgetting something?
Sure he lived on a hill. And pumping
down the slope was a yellow and steaming
river of piss, one that was now streaming
all over the chips. And what was worse?
Hadn’t the mangled strains of his cursed
singing only woken up Bernie, now leaning
out the doorway in the nightgown, her keening
eyes like murderous floodlights, as she watched
the sorry excuse for a poorly botched
shambles that was unfolding before her.
But Lush was not one to be deterred.
Over he staggered, picked up the chips
and offered them out to Bernie – the thick
trickles of warmth running over his cursory
gift.
‘Shere,’ said he, ‘Shappyshannyvershary.’

This story in verse is totally engaging, very refreshing and an absolute delight to read.